A MILLIONAIRE'S CHOICE: Mr. Marshall Field's Loening amphibian in which he and his bride (formerly Mrs. Dudley Coats) are making a honeymoon tour. 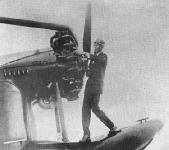 Lindbergh seen with his personal Loening Amphibian C2C, in which he frequently visited the Morrow estate.

THE LOENING CABIN AMPHIBIAN: Three-quarter front view of the machine on the water. It is the commercial development of the Loening OL-8.

THE CHICAGO AERO EXPOSITION: One of representative types of aircraft out of the seventy odd on view - (3) Keystone-Loening Amphibian Air Yacht (500 h.p. Wright "Cyclone").

At the Detroit Show: The Loening 4-passenger amphibian is engined by a Pratt and Witney Wasp.

THE AERIAL 'BUS: The Loening amphibian, which is employed on the "Air Ferry" services operated in America.

THE LOENING CABIN AMPHIBIAN: Side elevation, showing hr greater detail the general layout of the hull and cabin.