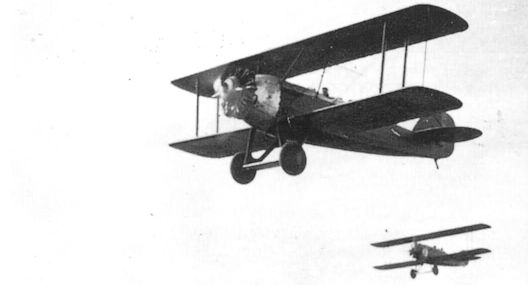 A pair of SET-3s during a training flight in the early 1930s.

SET-31 training biplane proved to be suitable for various tasks

SET-31 No 11, was the first SET aircraft to receive a civilian registration. CV-NIC’s owner, Prince Nicolae, made several long range flights in it. On August 18, 1931, new regulations came in changing the Romanian registration prefix and the aircraft was reregistered YR-ABA. It was later transferred to the FARR’s fighter fleet.

SET-31 No 17 was one of the last survivors. The wingless airframe was used for parachute experiments in the summer of 1941. The yellow ring, denoting an ‘Axis’ aircraft has been painted on the fuselage, but the new FARR markings, the so-called ‘Michael cross’ has not been applied. This came into effect from May 1941.

A Romanian SET on a visit to Italy. Perhaps it is the SET-41R flown in July 1933 on a nine-day European tour, but doubtless others will supply more detailed information.

A SET-4H training and light communications seaplane. This was the only Romanian seaplane design to see service.

‘Pilot’s Monument’ performed by the SET-4 No 18. This was the first series production SET aircraft to carry armament.