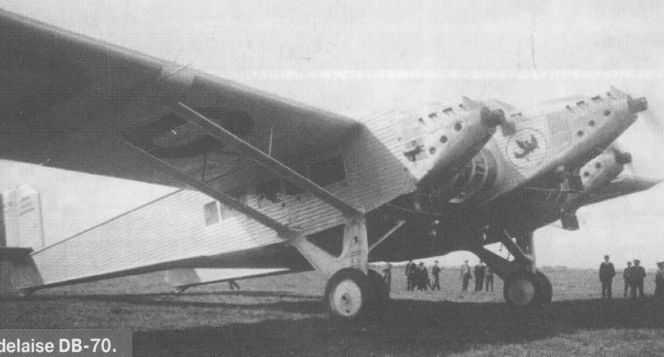 CONSTRUCTED entirely of duralumin and equipped with three 600-h.p. Hispano-Suiza Motors, fitted with reduction gears, the new French monoplane "DB 70" presents many interesting features. ДальшеMore>>> It is the first to appear of the new French transport machines of the 1930 design, and is one of the largest that have been constructed up to date.
It is designed to accommodate 28 passengers for day operation and 24 for night flying. The greater part of the passenger accommodation is situated in a large centre section, between the thick main wings, and is actually an enlarged wing in itself, contributing a considerable amount to the lifting surface of the machine.
In fact, the D.B. 70 resembles a combination of the American Burnelli "aerofoil-fuselage," and the Junkers G. 38 "all-in-wing" types - both of which have been described in FLIGHT. An important difference in the case of the DB 70, however, is that it has two fuselages "growing" out of the sides (or outer extremities) of the centre section, which carry the tail plane.
The three engines are located on this centre section, one centrally and the other two on "extensions" of the fuselages - all three being easily accessible during flight by means of a passage situated in the leading edge of the centre section.
The pilots' cockpit - with two seats side by side and dual control - is situated behind the central engine above the loading edge of the centre section.
Recent preliminary trial flights at the Merignac Aerodrome gave very satisfactory results, the machine taking off with a load of 5 tons after a preliminary run of only 400 ft.

The DB 70 is constructed with a centre section between its main wings, which is of the extra thick wing type, and to which the main wings are attached on either side. Like all the rest of the 'plane, it is constructed entirely of duralumin, and the bolts and the fastenings are made of highly-tempered steel. It has a biconvex profile, and is unsymmetrical in shape. The framework consists of four main spars running parallel to the wings, and braced by cross and intersecting ribs. The spars in the wings and their struts, together with the motor supports, the fuselages and the landing chassis are bolted on to this centre section.

As previously stated, the passengers' quarters are situated in the centre section. They consist of two cabins, on each side of a large central saloon. There are also a lavatory, a W.C. and a kitchen behind the saloon. The cabins and the saloons together have 2,050 cubic ft. of space (58 cubic m.) and a floor space of more than 315 sq. ft. (30 sq. m.), with a height of 6 ft. 2 in. Each cabin occupies a bay or section of the centre section, and extends out into the first bay of the corresponding fuselage, which is joined to the rear end of the centre section (see diagram). Each cabin has a width of 5 ft. 10 in. and a length of 17 ft. 5 in.
For day flying the DB 70 will be equipped to carry 28 passengers, 10 in each cabin and 8 in saloon. For night operation there will be accommodation for 24 passengers. There will be 16 berths in the two cabins and 8 passengers will have large arm chairs in which to sleep in the saloon. Good-sized windows will be fitted on the lateral sides of the centre section and of the fuselages, and there will also be transparent floor lights installed on the lower side of the centre section, which forms the floor of the saloon and the cabins.

The wings have a uniform depth and profile, with a flat intrados (lower side). They are of simple construction and easily mounted. They have been mounted with a three dihedral angle, so as to assure a good stability. Each wing is attached to the side of the centre section, and is braced at its centre by a streamlined strut, the lower end of which is attached in turn to the lower side of the centre section. They are covered with duralumin sheet.

The framework of the fuselage is constructed with four longerons, which are braced with vertical and transversal ribs. This framework is covered with duralumin sheet.

The horizontal stabiliser is equipped with compensated elevators. The two fuselages being so far apart permits of a wide (long) empennage. The fixed horizontal portion of the empennage is adjustable. There are two vertical directional rudders, each mounted in line with its respective fuselage. Each rudder consists of a fixed portion and a compensated movable surface.

The landing chassis is of the split-axle type, with a track between the two pairs of wheels, of 21 ft. 10 in. It is composed of two sets of two wheels each, 1,300 by 275 mm. dimensions, mounted in line with the axes of their respective fuselages. Each pair of wheels is equipped with hydro-pneumatic shock absorbers.

The DB 70 is equipped with three 600 h.p. Hispano-Suiza, water-cooled motors, fitted with reduction gears of the same type as used by Dieudonne Costes in making his recent record flights. They drive tractor airscrews, and are mounted well forward of the centre section, so as to give the greatest efficiency possible. The fuel tanks are installed in the wings.
A passageway has been constructed in the leading edge of the centre section, which permits a mechanic to have constant access to the motors, while in flight. The motors are completely separated from the cabins by a fireproof partition, and also by a second partition designed to absorb their noise.

The Pilot's and Navigator's Seats