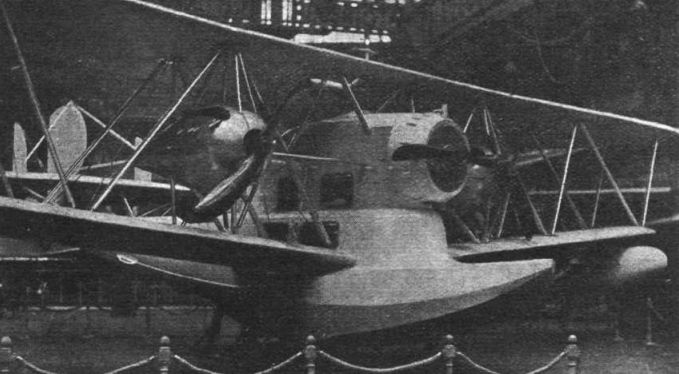 This firm exhibited a flying boat of very unconventional design as regards the boat itself and its cabin. The general impression of the machine, however, was that of very business-like construction. ДальшеMore>>> The boat was of the two-stepped type, the front portion having a vee bottom, while the part aft of the steps was of approximately circular section. Three engines provided the power, two of which were Hispanos placed between the planes, while the third was a Salmson, built into the nose of the cabin above the main flying boat hull. Owing to its short length the Salmson engine does not take up much space longitudinally, and it has, therefore, been possible to fit it into the front wall of the cabin without encroaching upon the cabin space. Entrance to the cabin is through a door in the rear end, the two halves of the door forming, when closed, a curved edge as indicated in one of our sketches. The machine carries four passengers inside the cabin, and has, in addition, a useful load for mails, etc., of about 650 lbs. The pilot sits in a small cockpit let into the roof of the cabin, and a triangular opening is cut in the top plane in order to provide a view upwards. In principle the arrangement of cabin and engines, etc., would appear quite good; but the manner of carrying it out seems unnecessarily complicated with its many curves and joining of different surfaces.
The main planes are braced by sloping struts solely, the struts being arranged in the form of a Warren girder. The bottom plane is set at a very pronounced dihedral angle and carries wing tip floats of approximately circular section.

The Liore and Olivier flying-boat: The hull is of most unusual design

THE PARIS AERO SHOW: may be seen the Breguet, the Liore et Olivier and the Handley Page 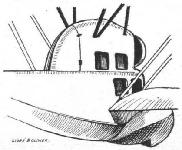