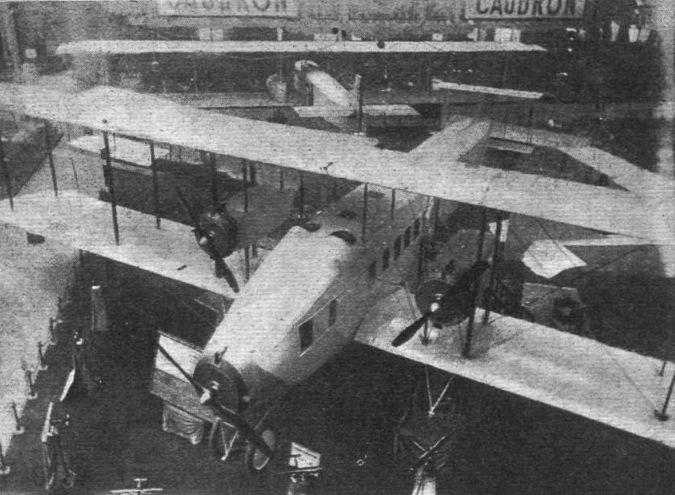 Altogether three machines were shown by Rene Caudron, two in the Grande Nef, and one in the gallery. Of the two machines exhibited in the main hall one is the C 25, a very large three-engined biplane, ДальшеMore>>> carrying 16 passengers in addition to two pilots, or one pilot and one engineer or wireless operator. The other is a smaller machine, the C 33, which is fitted with two 80 h.p. le Rhone engines, and carries three passengers in addition to the pilot. Although both machines have many points of interest, they are not altogether above criticism, and the general impression of them is that they are somewhat behind the time.
The C 25 is a very large machine, its span being 82 ft. 6 in., and its total wing area 1,670 sq. ft. The cabin is beautifully finished, in typically French style, and whatever one has against the machine as an aeroplane, the passengers have nothing to complain of as regards comfort and ease. Of room there is plenty, both in the main cabin aft, which accommodates the majority of the passengers, and in the smaller forward cabin, which is reached from the main one by diving under the pilots’ seats. The fuselage is three-ply covered in front for the whole length of the cabin, aft of which the covering is in the form of fabric.
The arrangement of the engines is rather unusual, and certainly would appear to have its good points. Two of the three Canton Unne type Z 9 250 h.p. engines, are mounted on the wings in the usual way, while the third engine is placed in the nose of the main fuselage, where it is supported when the machine is on the ground, by an undercarriage of its own. There is thus very little likelihood of the machine turning on to its nose when alighting on bad ground, while the three engines would seem to afford added security in flying, since the fact of one cutting out will only reduce the power by one-third, and one presumes that directional control can be maintained with one of the wing engines not working. Even in the worst case - that of the machine being untrollable with one wing engine stopped - the front engine would be sufficient to give the machine a very much better gliding angle, even if it could not be expected to enable it to remain in the air, as the loading would in that case be over 48 lbs./h.p.
The fuel for the two side engines is carried in tanks behind the engines, the only petrol in the fuselage being that for the front engine, which is carried in a tank between the front cabin and the engine.
The two pilots are placed side by side in front of the leading edge of the planes, their cockpit being a sort of second story above the front cabin. From here, as the pilots are outside, the view is by no means bad, especially as the nose of the body has a pronounced downward slope.
Owing to the large span of the machine the main planes are made to fold back, the outer engine struts being in duplicate, so to speak, placed side by side and in surface contact with one another. This arrangement leaves a Vee-shaped groove down the entire length of the rear edge of the struts, which is no, one imagines, conducive to low resistance. The feature which we like least of all in this machine is the wing bracing, which is in the form of solid piano wire of great thickness. Not only does it appear to us that to bend a wire of such thickness without materially affecting its strength must be a difficult job, but such loops are very liable to stretch in use, which would entail a great amount of work in trueing up when the machine has been flying for some time. The inter-plane struts, which are of wood, are very thin for their length, and it has been necessary to provide them with king posts and lateral bracing to prevent them from buckling. One would think that it would have paid to have made the struts of sufficient thickness to carry their loads without this external aid.
Ailerons are fitted to both top and bottom planes, and there are, in addition, auxiliary ailerons between the planes. The main ones are not balanced, but the inter-plane ones are pivoted a considerable distance behind their centre of pressure, and as they are linked up, as shown in one of the accompanying sketches, to the main ailerons, the whole system is balanced.
A biplane tail is fitted, and there are three rudders, of which only the outer ones are balanced. The vertical fin does not look any too large, and the load on the rudders, when one wing engine is out of commission, would probably be considerable.

On tbe Caudron Stand: View from above of the large three-engined Caudron passenger machine

THE THREE-ENGINED (CLERGET) CAUDRON PILOTED BY MAICON: This machine had to retire for repairs to her floats, which were leaking badly

The Caudron way of balancing ailerons : The auxiliary aileron between the planes is pivoted behind its centre of pressure, and as it is linked up to the main ailerons, serves to balance them
<<   0/0   >>