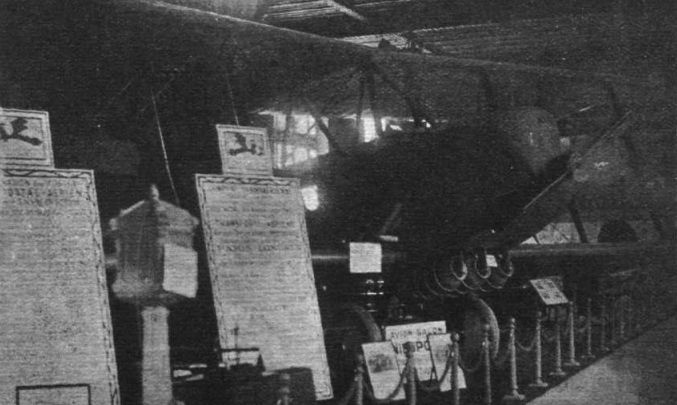 This firm, which looks after the Paris end of the British Aircraft Transport and Travel, is showing one machine in the gallery, a Nieuport-built biplane with cabin for five ДальшеMore>>> passengers. The machine also carries a wireless operator, and is fitted out with wireless transmission and receiving sets. The engine is a 450 h.p. Renault, entirely cowled in, which gives the machine a speed, it is stated, of about 118 m.p.h. The radiators, three of the Lamblin type, are mounted under the front part of the fuselage between the front undercarriage struts.
The main feature of this Nieuport machine is its wing section, which is extremely thick, not unlike the Schukowsky aerofoil, or those of some of the Fokker machines. The section is, however, uniform throughout, that is to say, there is no tapering of the spars, and the section does not decrease either in chord or depth. Ailerons are fitted to the bottom plane only, and are very long, extending nearly up to the sides of the fuselage. The top plane is in two halves bolted to a cabane consisting of two pairs of N formation struts placed in the form of an inverted vee. In view of the thick wing section the speed of 118 m.p.h. is very good, and although the loading is heavy the machine probably lands quite slowly on account of the high-lift section.

Compagnie Generale Transaerienne: This firm was showing in the gallery a Nieuport-built passenger machine intended for the London-Paris service.

On the Nieuport-Delage commercial machine ailerons are fitted to the top plane only. They are operated by cranks and struts from the lower plane.
<<   0/0   >>