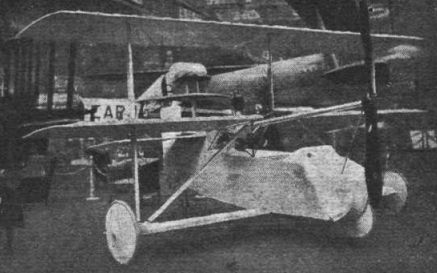 In one respect only is there any similarity between the Clement machines exhibited at this show and those of former years: metal construction has been extensively employed. This ДальшеMore>>> was ever one of the features of the Clement aeroplanes, but it cannot be said that this constructor has progressed much, considering his long experience of metal construction. One of the panels on the stand bears the legend: R. Moineau, Ingenieur. We do not know if this is our old friend of pre-War Breguet fame, but the fondness for tubular construction which is evident in the machines would almost indicate this to be so.

In addition to the monoplane racer, L. Clement exhibits a small triplane of very curious design. The two upper planes are of greater span than the bottom one, which carries at its tips the two main landing wheels. The body is very low and carries, in an opening in the middle plane, a 35 h.p. Anzani engine. Transmission to the tractor screw is by a long shaft passing over the pilot’s head, supported in front by a couple of tubes from the nose of the fuselage. In the nose, immediately under the airscrew, is a third wheel, designed evidently to prevent the machine from digging the nose of the low body into the ground.
The pilot sits in a canvas hammock seat with his head just in front of the planes, and whatever objections one may have to other features of the design, he certainly obtains a very good view. Lateral control is by warping the top and middle plane, the lower plane being rigid. There is only one strut on each side, attached to the front spar. From the top of each strut run two lift wires, one to the nose and one to the stern of the fuselage. These wires thus, in addition to their main function as lift wires, act as drag and anti-drag wires. The bottom plane is also braced to nose and stern to give it greater rigidity in a longitudinal direction. The landing shocks are transmitted, via rubber shock-absorbers, to diagonal tubes running to the roots of the centre plane. As, however, a space has to be left here for the propeller shaft, the landing shocks on the two diagonal tubes are transmitted to the single vertical centre strut and to the fuselage via a kind of roof girder truss consisting of four tubes meeting at a point and forming a bridge over the propeller shaft. Although the machine looks very unorthodox it is not without its good points, and except for the placing of the tail there is not really very much to find fault with as regards principle of design. The leading edge of the tail almost touches the trading edge of the middle plane, and one imagines that the machine will hunt or, to use a more modern phrase, pitch violently.

THE CLEMENT TRIPLANE GLIDER: This machine was shown in 1919 as a power-driven machine.