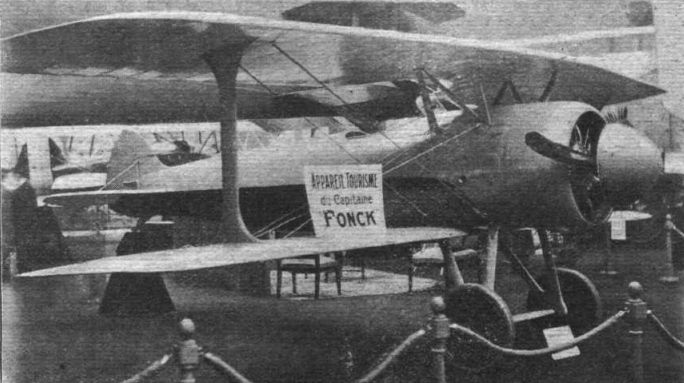 Three very interesting Spad machines are exhibited, interesting because, while retaining the characteristics of the Spads built during the War, they are, as regards two of them, designed ДальшеMore>>> for sporting purposes, having low-powered engines and consequently reasonable cost and upkeep. The third machine is a three-seater, with the two passengers seated inside an enclosed cabin.
The Spad monocoque type S 30 is small single-seater, with 45 h.p. Anzani engine. The wings are so arranged as to give the pilot a good view, and, while not very large, they are of sufficient area to ensure a low landing speed. The speed range is also very good, the maximum speed being in the neighbourhood of 87 m.p.h., and the landing speed about 37 m.p.h. The overall length is 19 ft. 6 ins., and the span 23 ft. 6 ins. The weight of the machine empty is 570 lbs., and in flying trim - with pilot and fuel for three hours - the weight is 880 lbs. The 45 h.p. Anzani engine is provided with a silencer which adds greatly to the comfort of the pilot. Strength has been especially studied, the machine having a factor of safety of 15.
The Spad monocoque type S 29 is a small two-seater, fitted with an 80 h.p. Le Rhone engine. The occupants are placed tandem fashion in the monocoque fuselage. The maximum speed is 102 m.p.h., and the landing speed just under 50 m.p.h. The length of the machine is 19 ft. 7 ins., and the span 25 ft. 5 ins. Empty the machine weighs 790 lbs., and fully loaded - with pilot and passenger and three hours' fuel - 1,230 lbs.

The second machine shown is a Type XXIX two-seater, with 80 h.p. le Rhone engine. The fuselage is, as usual, of monocoque construction, and the two seats are placed close together in a single cockpit, the passenger sitting with a leg on each side of the pilot as in the earlier Morane-Saulnier monoplanes. This arrangement, while not, perhaps, being particularly comfortable, has the advantage of saving space, while conversation between pilot and passenger is facilitated. The 80 h.p. le Rhone engine is mounted inside an aluminium cowl, open at the front, and there is a spinner in front of the propeller boss. This leaves an opening for the air-screw between cowl and spinner, and one noticed that the spinner in this, and in the Type XXX machine, was mounted on ball-bearings. Consequently, if the spinner is not absolutely balanced, it will probably not revolve with the screw, or at any rate, not so fast as the screw, and there is, therefore, no tendency for it to burst, as has been known to happen with spinners mounted on and revolving with the propeller.
As in the other Spads, the wings of the Type XXIX are characterised by a straight bottom plane and a back-swept top plane. The struts are of the same type as in the Limousine, but the bracing is in the form of stranded cables, the lift cables being in duplicate, with a thin wood lath in between them to form a fairing. The under-carriage is of the usual Spad type.
Underneath the wings of the huge Bleriot "Mammouth” was shown a small Spad single-seater sporting machine, with 45 h.p. Anzani engine. This biplane is known as the type XXX, and has a very strong family resemblance to the other Spads. There is the same back-swept top plane, the monocoque body and the inter-plane struts It is a very pretty and business-looking machine, as will be seen from the accompanying photograph. The spinner on this machine is somewhat smaller, probably to admit more air to the stationary engine than is required for the rotary of the Type XXIX. A two-branch exhaust collector conducts the exhaust-gases to a silencer placed some little distance aft under the fuselage, as shown in one of the accompanying sketches. As a sporting machine, the Type XXX should have a strong appeal, especially as the fuel consumption is low for the speed of the machine, and the landing speed is stated to be considerably below 40 m.p.h.

The Spad type S.29, 80 h.p. Le Rhone engine, which has two seats placed close together in a single cockpit

The Spad sporting single-seater, 45 h.p. Anzani engine: This machine has a landing speed of less than 40 m.p.h.

THE SPAD TYPE S.30: The 45 h.p. Anzani engine on this machine is provided with a silencer placed below the fuselage. On the right is shown a typical Spad rudder
<<   0/0   >>