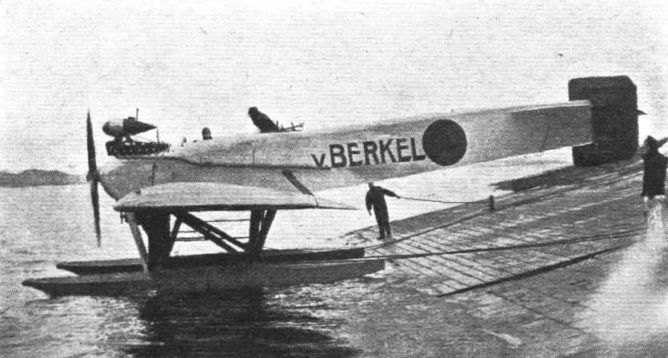 AT the time of the Elta Show at Amsterdam in the summer of 1919 we published, it may be remembered, an illustrated description of a seaplane exhibited by the Dutch ДальшеMore>>> firm of Van Berkel's Patent of Rotterdam. This machine was a biplane with a tail similar to that of the Brandenburg machines of North Sea fame. In a more recent form, the Van Berkel machine is a monoplane with the wing placed where ordinarily the lower plane of a biplane is situated, and braced by streamline steel tubes from the twin-float under-carriage. As several of these machines have been ordered by the Dutch Government for use, we believe, in the Dutch East Indies, a few notes dealing with the machine may be of interest.
From the accompanying photographs it will be seen that the Van Berkel W.B. follows closely the lines of the famous Brandenburg monoplanes which were at one time a pest in the North Sea. The flat-sided fuselage is very deep at the stern, and takes apparently the place of the usual vertical fin, of which none is fitted in front of the balanced rudder. The latter differs from that of the Brandenburg machine in that it extends and has a balance above as well as below the fuselage. Otherwise it is a matter of some difficulty to discover any difference between the two machines. Without knowing the detail construction, it is impossible to state whether this similarity is superficial only, or whether it extends to details.
The wing is of the semi-cantilever type, of fairly thick section and braced by a single pair of struts on each side. The photograph showing the machine in front view will give a good idea of the clean appearance. The bracing gives the impression of being very rigid, and it is a question whether, everything considered, this semi-cantilever arrangement is not to be preferred to the true cantilever wing. Certainly it should come out considerably lighter, and the resistance on the streamline tubes cannot amount to a great deal. A point which impresses one with regard to the wing is that the dihedral angle is very small for such a high e.g. Thus the Junkers monoplanes have been found to be very tricky laterally when near the stalling angle, in spite of the very pronounced dihedral angle of the wing. In the present machine the wing is not tapered towards the tip, and possibly this fact may explain the reason for the small dihedral.
The two floats are built of aluminium alloy, as it has been found that the ordinary wood floats do not stand the climatic conditions in the Dutch colonies very well. They are of the three-stepped type, and terminate in a vertical stern post while the nose is rounded. The machine is said to get off well in spite of its heavy loading, and its speed when once in the air is quite good.
The engine fitted is a Rolls-Royce Eagle VIII commercial type, and drives a tractor airscrew. Cooling is provided by two Lamblin "lobster pot" radiators placed underneath the fuselage between the struts of the undercarriage. In view of the use for which the machine is intended, the radiators are of large size so as to ensure adequate cooling in the hot climate of the Dutch East Indian Islands. The armament consists of three machine guns, two of which are fixed and fire forward, the third being operated by the gunner, and of a nest of bombs. The petrol tanks have a capacity of 172 gallons, which gives a duration of about 7 1/2 hours at full throttle. At cruising speed the range is approximately 1,000 miles. The maximum speed at low altitudes has been officially measured as 180.2 kms. per hour (112 m.p.h.), which is rather good for a seaplane of this power and loading. The total useful load amounts to 2,100 lbs., of which approximately 1,350 lbs. is taken up by the petrol. As a long-distance reconnaissance machine, the W.B. should prove quite useful in the colonies.
Its main dimensions are: Span, 64 ft.; length overall, 36 ft.; height, 14 ft.

The Van Berkel Monoplane: Leaving the slipway at the naval air station at De Mok