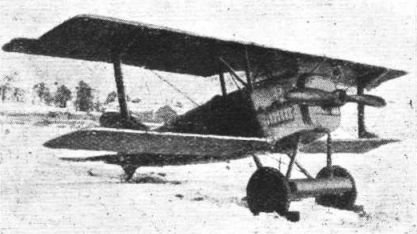 IN a recent issue of FLIGHT we gave some particulars of an original monoplane designed and built in Czecho-Slovakia, and we now give our readers a brief description of another interesting machine, hailing from ДальшеMore>>> this same country. The machine in question is a single-seater chaser biplane embodying several original features, constructed by the "Aero" Aviation Works of Bubenec, near Prague, from the designs of MM. Husnik and Vlasak. The designers of the "Ae-2.01" - as it is named - have endeavoured, as far as possible, to reduce head resistance to a minimum, and how much they have succeeded, as far as outward appearances go, is apparent from the accompanying illustrations - the general lines being exceptionally clean and neat.
The main planes do not call for any special attention, being constructed in the orthodox manner with two main box spars, and built-up ribs. The top plane is "straight" and in one piece, being supported above the fuselage by two sets of N struts sloping outward and an inverted V cabane, the latter running to the centre of the rear spar. Balanced ailerons of narrow chord are fitted to the top plane only, and these are mounted on steel tubes which extend within the plane to a point above the fuselage where they are connected to the control by means of crank arms and rods. They are thus positively operated.
The lower plane, which has a smaller span and chord (22 ft. 6 ins. and 3 ft. 3 1/4 ins. respectively), is in two sections, attached to small wing roots "growing" out of the fuselage. Top and bottom planes are separated by one interplane strut each side. These struts are of J form, built-up of steel tube with streamline fairing, the extremities connecting front and rear spars of each respective plane. The main vertical member of the strut is located at the rear spars, and wing stresses forward of this are transmitted through the "flanges" or horizontal members of the strut. The external bracing is of the single truss type, the cables being in duplicate; there are no incidence cables. The landing cables - which have a rather flat angle - run from the lower rear spar at the junction of the interplane strut to the top longeron of the fuselage at a point where the front member of the N strut is attached; the lift cables run from the rear spar attachment (lower plane) to the top rear spar at the junction of the interplane strut. We are not favourably impressed with this arrangement of bracing, especially when considering the stresses at big angles.
A lifting cantilever stabilising tail plane is fitted, and the elevators are divided and balanced. A triangular vertical fin is mounted above the fuselage, and to it is hinged the balanced rudder.
In the original design the fuselage was to be constructed, for the greater part, of duralumin, but in the present model welded steel tube work has been employed instead. In subsequent machines, however, the former metal is to be used. The fuselage is of clean streamline form, almost rectangular in cross-section, the sides, top and bottom being slightly curved. It is built up of four main tubular longerons, in eight bays, and numerous longitudinal stringers. The whole framework is wire braced. The engine, a 220 h.p. Hispano-Suiza, is totally enclosed within the nose of the fuselage, right in front of which is a large radiator with adjustable shutters.
Perhaps the most novel feature of this machine is the landing chassis. This consists of two V's connected near the extremities by a rigid axle or tie-rod. Hinged to two brackets on the underside of the latter, near the ends, are short stub-axles extending outward through the bottom of the V-struts and each carrying a wheel. These stub-axles are secured to the V-struts by rubber cord. Mounted on the rigid axle is an auxiliary petrol tank having a thick plane-section. By means of a quick-release device the pilot can, if desired, "drop" this petrol tank.
Two machine-guns are carried within the forward position of the fuselage, the muzzles projecting just above the radiator, one on each side. The control is of the single-stick and rudder-bar type.
The principal characteristics of the under :-
Span 23 ft. 8 ins.
Chord, top 4 ft. 3 ins.
Chord bottom 3 ft. 3 1/4 ins.
Overall length 17 ft. 10 ins.
Overall height 8 ft.
Area of main planes 172.16 sq. ft.
Weight, empty 1199.5 lbs.
Weight, full load 1909.5 lbs.
Weight, /sq. ft 11.1 lbs.
Weight, /h.p. 8.7 lbs.
Maximum speed 130 m.p.h.

FROM THE FIRST PRAGUE AVIATION MEETING: The first Czecho-Slovakian air competition was held from September 11 to 18, and is reported to have been a great success. Our photo shows the chaser "A.E.04'' of the Avia Works, Prague. This machine, which has a 185 h.p. B.M.W. engine, was first in the altitude competition and third in the speed contest over one kilometre, its speed being 136 m.p.h. It was piloted by R. Polanecky.

THE SECOND CZECH INTERNATIONAL AERO EXHIBITION AT PRAGUE: A close-up view of the "Ae.O.4."