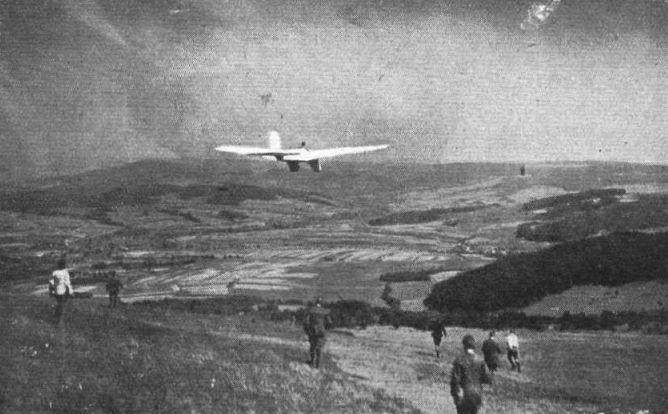 The Aachen monoplanes on which Klemperer did his excellent work are well shown in our photographs, and are similar to the machine which did so well in last year's competition. ДальшеMore>>> Some refinements have been incorporated, notably as regards the placing of the pilot. This year's models retain the "trousered" undercarriage which characterized the previous machine and the curved skids appear to have worked well. The problem of skids of suitable shape is less simple than one would imagine, and on this subject we may have something to say later. For the present we must confine ourselves to congratulating the Rhon competitors on their achievement and expressing the hope that next year even better results may be obtained.

MENTION has been made in our gliding notes from time to time of the tail-first machine or "Ente" (Duck) which Kerr Ingenieur Klemperer had produced for this years Rhon competitions. Unfortunately, the machine was finished late, and there had been no opportunity of making test flights with it when the competition opened. As the machine was of novel design, it is small wonder that a sufficiently thorough trial of it could not be made in time for it to take part in this year's Rhon meeting. Such flights as were made were purely in the nature of test flights, and revealed the fact that several alterations are still necessary before the machine can be considered tuned up. We believe that most of these were necessitated by wrong weight distribution. Before commencing a description of the machine, a drawing of which we reproduce by courtesy of Zeitschrift fur Flugtechnik und Motorluftschiffahrt, it may be of interest to quote some notes by Herr Klemperer in the same journal.
"The problem of the 'Canard' type," Herr Klemperer writes, "cannot yet be said to have been solved. It is a question of building a 'Canard' type conforming to modern aerodynamical ideas, especially with regard to incorporating cantilever wings. Secondly, it was to be supposed that particularly for a glider, the front plane might under certain conditions be useful in acting as a 'wind vane.' [The word used by Herr Klemperer is Windfuhler.-ED., FLIGHT.] The tail-first machine offers favourable possibilities for carrying a passenger without this resulting in making the machine unsuitable for use as a single-seater. In this type the centre of gravity and centre of lift approximately coincide so that, as distinct from the tail-behind type, the e.g. and c.p. of the empty machine are close together. The crew can therefore be placed on the e.g. without the trim of the machine being altered. A further advantage is that the centre of gravity (and, therefore, the seats) does not fall inside the centre-section of the wing, but in front of it. The result is that the wing attachment is simplified, while 'straight-through' wing spars can be used. Finally, the 'Canard' type lends itself to experiments with Lachmann slotted wings, as it can be landed at a much greater angle of incidence than can the tail-behind type.
"Thorough wind tunnel experiments carried out at Friedrichshafen and Gottingen have indicated the suitability of slotted wings on this type of machine, and the results of these tests will be published later. In the actual machine built, the slotted portion was confined to the ailerons, owing chiefly to the difficulty of providing a suitable arrangement for opening and closing the wing slots.
"The tests on the machine carried out up to the present, ten in all, included a few short 'hops.' At first we had trouble with starting the machine. These were overcome by altering the skids, and after the end of the meeting the machine got off very easily. A wind of but 3 to 4 metres per second, and a very short run along the gentle slope running from the top of the 'Kuppe' towards the plantation near the camp was sufficient for getting off. The difficulties which were experienced with directional stability were considerably lessened when a rear rudder, connected up to the front swivelling plane, was fitted.
"Although the 'Canard' type shows great longitudinal stability on tests of models, we found it very difficult on the elevator control. Even after the range of angles through which the front elevator could be moved had been increased, we found that longitudinal stability had not been attained. Evidently the large moment of inertia of this type of machine requires exceptionally large control surfaces. It is possible that difficulty may also be caused by the front plane, on taking off with the front at a considerable height above the ground, getting into a region of stronger wind which, at that low speed of the machine, may have considerable effect.
"The slotted ailerons did not behave badly, even in cases of stalling, of which there were several during the tests As the machine, on account of its robust construction, suffered no serious damage during the tests, the experiments will be continued when the controls have been altered. The results will be published in due course."
Regarding the machine itself, comparatively little information is available. The accompanying plan view gives a fair idea of the general arrangement. It will be seen that the main plane has a span of 39 ft. 5 ins., and a maximum chord of 5 ft. 11 ins. tapering to 4 ft. 2 1/2 ins. at the tip. The ailerons, which are of the slotted type, have a length of 9 ft. and an area of 13 sq. ft. each. The area of the main plane is 210 sq. ft. On the nose of the machine is placed the front elevator, which has an area of 42 sq. ft., the span being 17 ft. and the chord 2 ft. 9 ins. in the centre.
An interesting feature of this front elevator is that it serves the double purpose of elevator and rudder. To this end it is mounted on a ball-and-socket joint, which allows it to pivot around a lateral axis and also to rock around a longitudinal axis. To reduce the force necessary to turn the plane around the latter axis, small ailerons are fitted near the tips. These ailerons are connected up with the controls which rock the plane in such a way that, when it is desired to tilt the plane to port, the starboard flap moves down and the port flap up. The controls in the cockpit are of normal type, so as not to present unduly great difficulties in mastering this unusual system.

BRINGING HER BACK: Our photograph shows one way of bringing back a glider to the top of the hill after a flight. The wings are stacked on a German hay cart, the fuselage being trailed behind. The machine shown is the Aachen "Tail-first" monoplane on which Herr Klemperer crashed after getting into a spin when his glider was dropped from a kite balloon. 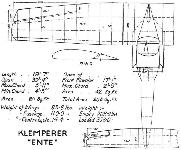