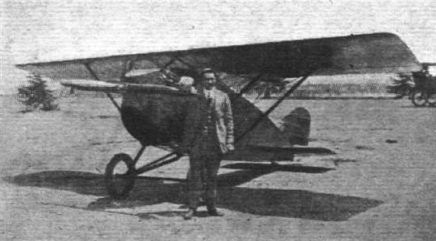 A NEAT little parasol monoplane was constructed by the Waterman Aircraft Mfg. Co., of Venice, Cal., U.S.A., for the Mercury Aviation Co., and we are indebted to our American contemporary, Aerial Age, for ДальшеMore>>> the following brief particulars of this machine. It was designed and built purely for racing purposes, and three factors only were taken into consideration - maximum speed with a stock Curtiss OX-5 engine, good visibility, and manoeuvrability on sharp turns. Such features as smart appearance, low landing speed, and fast climb have, therefore, been of secondary importance. In order completely to streamline the Curtiss engine it was necessary to build a fuselage of somewhat large proportions, but this, however, has been found to be a desirable feature, as the large keel surface area proved to be indispensable in making sharp turns at high speed.
The fuselage is of the orthodox longeron bulkhead and plywood construction. There are six bulkheads of fir varying from 5/8 in. 6-ply to 7/8 in. 9-ply. These are spaced more or less evenly from the front of the engine bearers to the rudder post. The maximum cross section of the fuselage occurs just aft of the engine, and is 31 ins. by 39 1/2 ins. The longerons are 1 1/8 in. square at the point of maximum depth, tapering to 7/8 in. at the stern. The veneer facing is 3-ply, 3/20 in. basswood and birch. The fuselage terminates at the rudder post with a square cross section, 12 ins. by 12 ins., behind which is attached an aluminium fairing 16 ins. long. The fuselage complete with tanks, seat, controls, instruments, etc., weighs 224 lbs.
The main planes, which have neither dihedral nor sweepback, are built up in standard web and strip construction with box spars. They are hinged to a tubular pylon at their roots, and are supported at a point 6 ft. from the root by tubular struts from the lower longerons of the fuselage. Single drift and anti-drift Hartshorne wires are used on each side, which take practically all the tension load, while the struts merely take the compression load. The box spars are unusually heavy, especially at their point of intersection with the overhang struts.
Both the rudder and elevator controls are enclosed in the fairing at the rear of the fuselage, and are operated through a system of staggered cranks and cables. External control wires and masts in the tail units are thus eliminated. The ailerons are operated by a system of rods and bell cranks, all of which are enclosed, except for a short horn on each aileron. The leading edges of all control surfaces are rounded and set into recesses in such a way that there is no gap between the surface and the member to which it is hinged. The complete wings weigh 115 lbs., and the tail surfaces, 35 lbs.
The 90 h.p. Curtiss is mounted in the nose of the fuselage, and is completely cowled in. A gravity fuel system with a 20-in. head eliminates the bother of the usual pressure systems. A large door in the rear of the aluminium fire wall gives access to the carburettor for adjustment and cleaning, and a small window in the side of the fuselage permits the inspection of the oil gauge in the side of the engine crank-case. The cooling system consists of one radiator placed on the starboard side of the fuselage, about 9 ins. aft of the rear cylinder. In so placing the radiator the pressure caused by its being off centre compensates for the airscrew torque, and does away with the usual right rudder setting when flying a straight course. A 7 ft. 9 in. diameter tractor screw, with 7 ft. pitch, is employed.
Steel tube is used throughout the construction of the under-carriage, which is rigid. The struts are hinged to suitable fittings at the bottom longerons. As there are no shock absorbers, an exceedingly light and simple gear has been obtained, but not one which would be highly recommended for landing on rough ground. Cross wires have been replaced by a diagonal tube carrying both tension and compression. The whole gear is streamlined with wooden fairing wrapped with tape and doped. The wheels are 26 ins by 3 ins. and the axle is 1 1/2 in. in diam.
Under the name of the "Mercury Gosling," and looking very smart painted "Mercury" red, this little machine put up an excellent performance at the Los Angeles Air Tournament held on July 16-17 last.
The following are the principal characteristics of this machine :-
Span 21 ft. 9 ins.
Chord 5 ft. 6 ins.
Overall length 18 ft. 6 ins.
Height 7 ft. 8 ins.
Wing curves U.S.A. 15.
Area of main planes 112 sq. ft.
Area of ailerons 16 sq. ft.
Area of tail plane 12 sq. ft.
Area of elevators 10 sq. ft.
Area of fin 1 1/2 sq. ft.
Area of rudder 5 sq. ft.
Weight empty 885 lbs.
Weight fully laden 1,130 lbs.
Weight/sq. ft. 11-1 lbs.
Weight/h.p. 12-5 lbs.
Speed range 60-130 m.p.h.