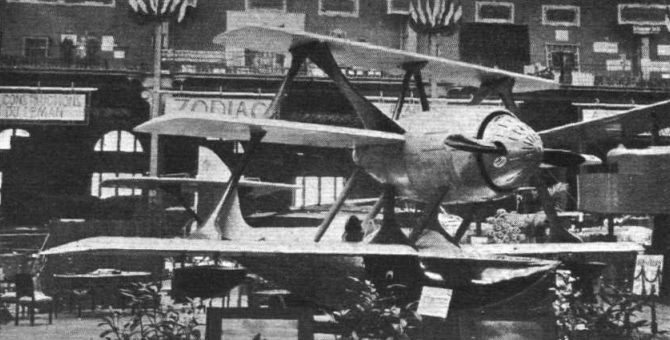 AT the Paris Show of 1919, this constructor exhibited a small triplane flying boat two-seater, ДальшеMore>>> with one of the, then, new 60 h.p Rhone engines. At the time one was somewhat in doubt as to the feasibility of getting a flying boat, however lightly built, off the water, with two up, and only a problematical 60 h.p. wherewith to do it. We understand that, as a matter of fact, that machine did get off, after having been fitted with a more powerful engine. At the present Show, a single-seater boat is exhibited, which shows few, if any, traces of the earlier model. This machine, which is a very nicely-built job, has a most unusual wing arrangement. As will be seen from the accompanying photograph, the lower plane is the largest and the top plane the smallest. The strutting is so arranged that a system of triangulation is provided which, presumably, renders bracing wires superfluous, as none are incorporated in the design. One is somewhat at a loss to account for the reasons which led to this unusual arrangement, as the effect of the small top plane would appear to be that the centre of thrust would be a very considerable distance above the centre of resistance. Also, in ordinary triplane arrangements, the top plane is the most efficient and as this is quite diminutive in this machine - which is, by the way, known as the H.6 - it would appear that the whole triplane combination is not likely to prove very efficient, even allowing for the absence of wire bracing.
The engine, a 130 h.p. Clerget, is mounted in a streamline power "egg," which also contains the petrol tank. It drives a tractor screw, having a spinner over the boss. The pilot sits just aft of the trailing edge .of the wings. There does not appear to be much room anywhere for mails, nor is the machine probably capable of carrying more than a relatively small useful load. 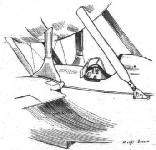