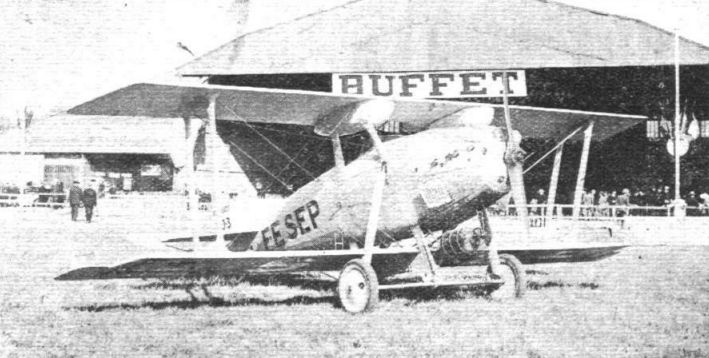 The other machine shown is a fairly small two-seater side-by-side biplane of very unorthodox, but eminently sensible, design. It is a serious attempt at introducing new methods of construction which shall be less costly in manufacture but equally serviceable' in use to the methods ordinarily adopted. Once the peculiarity of the design has been grasped, and one has become accustomed to the somewhat unusual appearance, the machine impresses one as a very clever piece of design, and one which, unlike so many novelties which are merely freaks with nothing to recommend them, is likely to survive its first show appearance. The number of component parts has, it seems, been reduced to an absolute minimum, and the resulting structure certainly gives the impression of strength. That the object of the design – cheapness – has been achieved appears to be proved by the fact that one is informed the machine can be built for 13,000 francs without engine (about L520 at normal rate of exchange, and L250 at present).
One of the accompanying sketches, which is mainly diagrammatic, shows the fundamental principle of the design. The backbone of the machine is formed, it will be seen, by two Vees of ply-wood, to which are attached the few remaining structural members, such as the engine bearers, the tail outriggers, the main planes and the under-carriage. The whole is afterwards enclosed in a light streamline casing formed by formers, stringers and fabric. Nothing could be much simpler, and the reduction of parts to a minimum must save a tremendous amount of work in manufacture and erecting.
The engine, a 180 h.p. Hispano-Suiza, is mounted in the nose, on bearers extending forward from the Vees. The whole after portion of the fuselage structure is composed of two ply-wood members arranged in the shape of a wedge. These members, which are built up of 11 laminations and have lightening holes cut in them, meet in a vertical knife-edge at the stern, and are attached with their front ends to the rear of the rear Vee. Compression tubes across the fuselage triangulate the lower portion of the angle between the Vees, the upper panel (in the front bay only) being braced by diagonal wires.
As already mentioned, the main planes attach to the feet and apex of the Vee. Both planes are straight, without dihedral, and are built up in one piece. The top plane bolts to the feet of the Vees by simple bolts, and the lower plane is slipped between the legs of the two Vees and attached to the longitudinal member by long bolts. The interplane struts are in the form of ply-wood rhomboids, and thus do away with incidence bracing. The wing bracing is of ordinary type, but it is not difficult to imagine the design carried a step further, using fairly thick high-lift wings and, possibly, strut bracing, thus doing away with all wires in the structure.
The under-carriage is entirely in steel tubing, and has two radius rods running from the apex of the Vees to the wheel, and a single telescopic tube from the wheel to the front of the Vees some distance up the side of the fuselage. A compression tube across the fuselage at this point relieves the Vees of all lateral load. The wheel track is wide, and it should be an easy matter to make the under-carriage as "squashy" as desired for school work or for amateur flying. Altogether the machine appears to have great possibilities, and when it is finished and tested we hope to be able to keep our readers informed of its future progress. The only data at present available are that the weight, "all-on," is 980 kilogrammes (2,160 lbs.) with pilot and passenger and four hours' fuel, and that the estimated speed is 112 m.p.h.

The Pierre Levasseur at le Bourget: This machine was exhibited at the last Paris Aero Show, and is remarkable for its unorthodox construction. It flies very well and sells at a very low price.

On the Pierre Levasseur Stand: On the left the skeleton of a torpedo 'plane, and on the right the side-by-side machine, which is of most unusual and rather clever design.

THE PIERRE LEVASSEUR SPORTS MODEL: This machine is of most unusual design, the general scheme being indicated in the drawing.

Attachment, on the Pierre Levasseur, of the single tubular strut which runs from the undercarriage Vee to the rear portion of the fuselage.
<<   0/0   >>