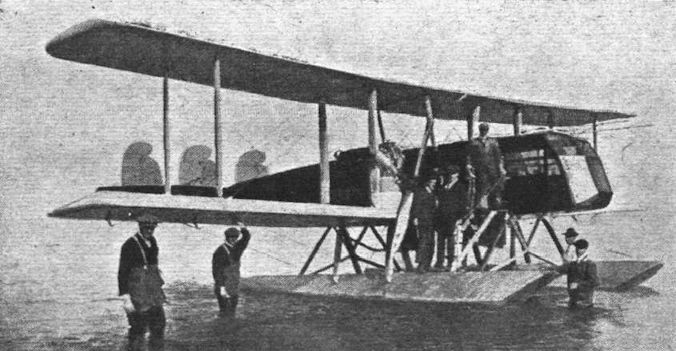 One of the uses to which aircraft may be put with undoubted advantage is surveying, in which we include forest patrol, aerial photography, mapping, etc. Where such work has to be effected in territories which are practically inaccessible via terra firma, aircraft offer exceptional opportunities for successfully carrying out such undertakings. With a view to producing an aeroplane suitable for working under such conditions - especially where there are no other landing facilities than rivers, lakes or sea - the Dayton-Wright Co. of Dayton, Ohio, U.S.A., sent one of their technical pilots to Canada, where such conditions as referred to above prevail, to study the requirements a machine would be called upon to serve in carrying out aerial survey work.
As a result of his investigations, they have just completed the "F.P.2" seaplane, described and illustrated herewith. Four main factors were taken into consideration in designing this machine, viz. :- (1) As wide as possible a range of vision for the occupants; (2) Comprehensive appointments and equipment for the crew; (3) Provisions ensuring the safety of the machine under almost any eventuality; (4) The adaption of the machine to the special conditions under which it would be called to operate.
The "F.P.2" is a twin-engined, fuselage biplane, fitted with twin floats. Upper and lower planes are of equal span, and the outer panels, which are set at a dihedral angle of 2 degrees, are interchangeable - as is also the case with many of the fittings. The wings are fabric covered and built upon box-spars; the interplane struts are seamless steel tubes of streamline shape.
The fuselage is built-up of four spruce longerons and several veneer bulkheads, and is covered with a special three-ply. This consists of a core of Balsa wood, and black walnut facings. The forward portion of the fuselage forms a totally enclosed cabin for the pilot and crew, who are thus thoroughly protected against cold, wind and rain, whilst the noise of the engines is also deadened in the cabin. Seats are provided for four persons, arranged in pairs, the front pair being made to swivel so as to face the rear when the machine is at rest on the water, and a folding table may be placed between the four seats. Access to the cabin is from the float by means of a folding ladder and through a large door in the side of the fuselage; folding doors ace also provided in the roof as emergency exits.
Windows let in the sides and bottom of the fuselage afford excellent vision sideways, forward and directly downward. The window beside the pilot may be folded out of the way to ensure increased vision. The rear part of the fuselage affords a clear space of 15 ft. by 4 ft. by 4 ft. 6 ins., which may be used for stowing baggage, camp equipment, provisions, etc. Folding bunks can also be fitted.
For the power plant two 420 h.p. Liberty engines, driving four-bladed tractor screws, are mounted on the lower plane centre sections. Originally, two 210 h.p. Hall-Scott "L.6" engines were fitted, driving pusher screws, but the former engines have been installed to ensure a larger reserve of power - especially when flying on one engine - and a higher speed.
The twin floats are of the U.S. Naval Air Service type, and are mounted immediately below the engines.
The principal characteristics of the "F.P.2" are :-
Span 51 ft. 5 ins.
Overall length 36 ft. 10 ins.
Overall height 14 ft.
Gap 7 ft. 8 1/2 ins.
Incidence 2 deg.
Dihedral 2 deg.
Wing section U.S.A. 27.
Wing area 668 sq. ft.
Area of ailerons 88 sq. ft.
Area of tail plane 53-8 sq. ft.
Area of elevators 29 sq. ft.
Area of rudders (3) 28-7 sq. ft.
Area of fins (3) 20-8 sq. ft.
Weight empty 5,726 lbs.
Weight loaded 7,588 lbs.
Weight/sq. ft. 11-3 lbs.
Weight/h.p. 9 lbs.
Speed range 63-120 m.p.h.
Climb in 10 mins 5,000 ft.
Take off 22 secs.
Range 325 miles at 90 m.p.h.

The Dayton-Wright "F.P.2" Forest Patrol and Survey Seaplane. The machine is shown as fitted with two (420 h.p.) Liberty engines with tractor screws. 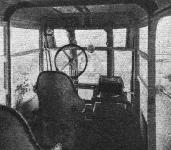