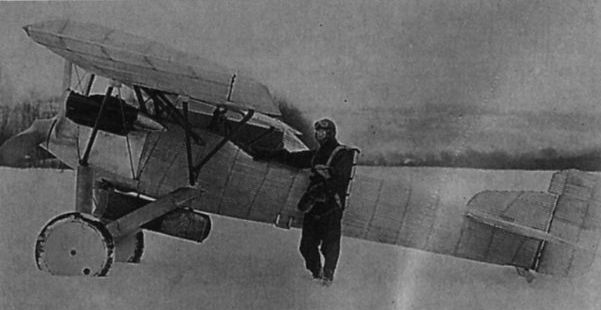 The Thomas-Morse Machines. - In addition to six M.B.3 biplanes, which are more or less conventional pursuit-type machines,, and one M.B.7, a parasol monoplane similar to that entered in last year's race, the ДальшеMore>>> Army had two new Thomas-Morse racers in this year's race of a very interesting type. Unfortunately, detailed particulars of these two machines, which were of the same type, are lacking, but it will be seen from one of the accompanying illustrations that the general lines resemble those of the M.B.7 in that it is a parasol monoplane of the "semi-cantilever" type, with an arch or hump in the centre of the wings. The T.M.22, as this new type is styled, differs considerably otherwise, however, for it is constructed entirely of metal. The wings, tail surfaces rand fuselage are covered with corrugated sheet duralumin, except for the fore part of the fuselage, where the metal is quite smooth. This metal is also employed in the construction of the fuselage, wing and tail plane structures, but steel tubing is used for the engine mounting. The engine is the new 600 h.p. "2025" Packard previously referred to. The wings are mounted above the fuselage by four struts each side of the fuselage, the first two front ones of each set forming an inverted V. The distance from the attachment of these struts on the wings to the wing tip equals about one-third the total span.
Characteristics: Span, 29 ft.; length 19 ft. 9 ins.; chord, 6 ft.; total wing area, 172 sq. ft.; weight (laden), 2,750 lbs.; loading/h.p., 4-5 lbs.; loading/sq. ft., 16 lbs.

Thomas-Morse abandoned the MB-9 before it could be submitted for USAAS evaluation.

THE PULITZER TROPHY RACE: One of the three monoplanes entered by the U.S. Army Air Service. The Thomas-Morse TM 22 all-metal "parasol," 600 h.p. Packard.