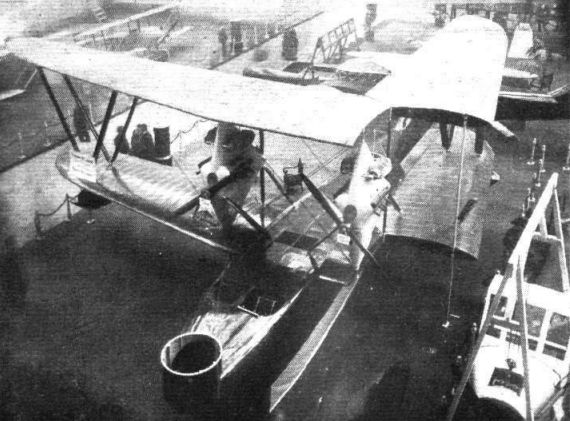 ALREADY well known in the automobile world, it is only recently that Bellanger Freres have taken up aircraft construction. At the Paris Aero Show one complete ДальшеMore>>> machine is shown, a twin-engined flying boat for use with the French navy. In addition, a "commercial" hull is shown, intended to fit into the same set of wings.
The complete machine, designed by Denhaut, possesses several distinctive features, not only in hull design, but also in the aeroplane details. The boat hull is of the flat-sided variety, with Vee bottom and flat deck. The planking is three-ply wood, and the hull is chiefly remarkable for the fact that there is no step, as we have come to understand the term. In place of the step there is merely a sharp change in the direction of the lower stringers. Behind this "break" there appears to be a short length of hull bottom in which the chine line is slightly concave, although the Vee bottom is retained, extending up to the stern post. It is claimed that this form of hull has been found to get off with a smaller expenditure of power than a similar hull with steps, and that alighting is made with a minimum of shock. It might be pointed out that the break in the lines, corresponding to a step, occurs very far aft, approximately under the rear spar, and therefore, presumably, well aft of the centre of gravity of the machine.
In the extreme nose of the hull is a cockpit for a gunner, the coaming being shaped to take a circular gun-mounting. The cockpit for pilot and, engineer is placed approximately half-way between the nose and the leading edge of the lower plane. A considerable distance aft of the wings is another gunner's cockpit.
The wings are of fairly deep camber, and are of unusual plan form in that the trailing edge is straight while the leading edge shows a gentle curve terminating in fairly pointed tips. Both top and bottom planes are fitted with ailerons, these being of high aspect ratio and provided with horn balance. The wing bracing is somewhat unusual, there being a wire-braced centre section between the two engine mountings, followed on each side by a wire-braced bay, and finally, towards the tips, a set of Vee struts.
Of very peculiar design are the engine supports and cowls. The engine bearers appear to be carried from the front spars only, or at any rate mainly, and to be connected to top and bottom front spars by the apices of steel tube pyramids. Running back horizontally from the engine to the rear strut is a tail piece, similarly shaped, which serves to streamline the engine housing. The entire engine mounting is cowled in, the only portions projecting being the cam covers, exhaust pipes and sparking plugs. Two Lamblin radiators are mounted on the sides of each engine, and are fitted with the new type fan-shape shutters, operated by a small differential gear.
The main petrol tanks are carried in the hull and in the curved wing roots of the lower plane. A gravity service tank is built into the top centre section.
The tail surfaces are of usual type, with the exception of the fin, which is of quite unusual thickness, being the full width of the hull and formed integral with it.
The commercial hull shown is similar in outward shape except that there are no gunners' cockpits, a cabin seating six passengers being provided instead. As the power of the Hispano engines is 300 h.p. each, the machine uses 100 h.p. for each passenger, which is scarcely a commercial proposition.
Following are the main characteristics of the Bellanger flying boat: Length of hull, 14 ms. (45 ft. 10 ins.); span, 20 ms. (65 ft. 7 ins.); wing area, 70 sq. m. (750 sq. ft.); weight empty, 2,000 kgs. (4,400 lbs.); total loaded weight, 3,500 kgs. (7,700 lbs.); speed, 180 kms./hr. (112 m.p.h.); range with six passengers and a crew of three, 1,000 kms. (620 miles); endurance, 6 hrs.

THE BELLANGER FLYING BOAT: A front view of the port engine.