IN our issue for July 12, we drew attention to "Some Climb," as credited by the lay press to Lieut. Simonet upon a 7 h.p. "motor-glider." Promptly M. Simonet from Brussels disowns the soft impeachment, and we are ДальшеMore>>> glad to say sends us not only the interesting facts, but also forwards a couple of photographs of his little 'plane, which we have much pleasure in reproducing. Lieut. Simonet's accompanying disclaimer and statement (which we were compelled to hold over) is as follows :-
"I have just read in your interesting paper your article ‘Some Climb’ regarding my performances on the Belgian glider 'Poncelet,' fitted with a 7-10 h.p. Anzani engine.
"I have not climbed at 2,600 ft. in one minute! It is, of course, a mistake on the part of the daily press. The truth is this :-
"Saturday, July 7, I tried for the first time the Poncelet light 'plane (tried before successfully as a glider). I flew 17 minutes at 100 to 200 metres; next day I flew 15 minutes; the Monday I flew 28 minutes and reached 800 metres. Tuesday I flew 45 minutes and reached easily (in about 20 minutes) a height of 1,100 metres. The machine is very well balanced, possesses a wide speed range (40 to 85 kilos.), lands at 35 kilos, per hour, and climbs at a rate of 60 to 75 m. per minute. The machine can be readily transformed to a pure glider by only removing engine and gasoline tank, which is placed behind pilot's head. The balance is exactly the same; this seems extraordinary as the pilot's seat is in front of the wing and the engine weighs 32 kgs. I propose, as you know already, to pilot this machine at the French gliding competition at Cherbourg. Another Belgian machine, the S.A.B.C.A. Jullien, fitted with a British Douglas five-over engine, will also take part in the competition.
"The 'Poncelet' light 'plane characteristics are as follows: span, 11 m. 20; length, 6 m. 70; weight: with engine, 100 kgs.; without engine, tank, etc., 155 kgs.; surface, 20 m.2; engine, 7-10 h.p. Anzani 1,100 c.c, developing 10 h.p. at max. revs. (1,550); petrol tank, 18 litres, oil tank, 3 litres, giving about 3 hours' flight duration. Wing: Gottingen section - deepest section, 38 mm."
The Poncelet Glider was illustrated in FLIGHT for March 1 last, and a comparison of this and the light plane is interesting.

<...>
The glider on which Commandant Massaux remained aloft for 10 hrs. 19 mins. 43 2/5 secs, was the Poncelet "Vivette," which took part as a light 'plane in the 1923 Lympne meeting. The glider is no doubt very efficient, but the pilots cockpit appeared extremely cramped, and it is something of a mystery how Massaux managed to "stick it" for nearly 10 1/2 hours.
<...>

The Belgian Poncelet Glider, in flight and on the ground.

THE PONCELET LIGHT 'PLANE: At rest and in flight.

NO. 16, THE BELGIAN PONCELET LIGHT 'PLANE AT LYMPNE: Three-quarter front and rear views, and, below, the machine with wing stacked on top of the fuselage, ready for transport. The "Vivette," as No. 16 is called, is fitted with a four-cylinder Sergant engine.

The "Poncelet" at Lympne Lieut. Simonet in the cockpit of his machine "Castar." Inset, the machine in flight. 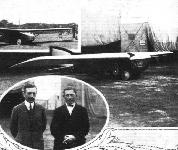 ONE OF TWO "RECORDMEN": The world's duration "record" holder, the Poncelet "Vivette," which has remained aloft for 10 hours 19 minutes 43 2/5 seconds. The inset shows M. Alfred Auger, left, pilot of the " Vautour," and Commandant Massaux, pilot of the "Vivette."

THE "VIVETTE" TURNS TURTLE: In starting for a flight at Lympne the Poncelet light 'plane "Vivette" was caught by a gust under one wing, with the result that she was blown on to one wing tip, buckled the port wheel, and turned over on her back. The pilot was unhurt. The larger photograph shows willing helpers carrying the machine back with her wheels uppermost, in the good old 1910-11 style. In the inset the machine is seen at the moment of striking.

LIGHT 'PLANES AT LYMPNE: Some constructional details. 6. In the Poncelet monoplanes the gap between aileron and rear wing spar is covered with a strip of celluloid.

LIGHT 'PLANES AT LYMPNE: A few interesting constructional features. 2, The petrol tank on the Poncelet monoplanes forms a fairing behind the pilot's head.