The Avro light biplane: Side view.

A Row of Light 'Planes at Lympne: In the foreground the Avro biplane, No. 5. The spectators on the left are following the evolutions of Capt. Broad on a de Havilland monoplane. 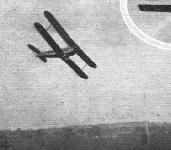 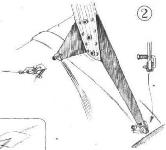 LIGHT 'PLANES AT LYMPNE: Some interesting constructional features: 3, Petrol and oil tanks of the Avro biplane (No. 5).