ONE of the most interesting of the machines which took part in this year's Rhon competitions was the Darmstadt "Konsul," on which Botsch covered a distance of 12 miles. By the courtesy of our German contemporary ДальшеMore>>> Flugsport we are able this week to publish the general arrangement drawings of this machine, and also a curve of gliding angles. The machine was designed for long-distance flights, as the Darmstadt students considered that the problem of soaring in an up-current had already been solved, the quality required being low rate of descent. For long-distance work, however, it was necessary that the machine should be able to cover the greatest possible distance for a given loss of height. High L/D ratio, or, in other words, a good gliding angle in still air, was wanted, and in order to cover a good distance under varying wind conditions a good gliding angle over a wide range of speeds was required. The result of these considerations was that the designers decided to "go the limit" on aspect ratio, and from the drawings it will be seen that this appears to have been done, the wing span being no less than 18-1 m. (61 ft. 4 ins.), while the chord is 1-2 m. (3 ft. 11 ins.), giving an aspect ratio of 15-6. It is a matter for surprise that such a wing structure has been possible for a reasonable weight, and that sufficient controllability has been obtained.
FROM the accompanying curve the gliding angle of the Darmstadt "Konsul" can be ascertained under varying conditions. The curve indicates that normally, i.e., in still air, the "Konsul" has an optimum gliding angle of 1 in 21-4, at a speed of 14-8 m. per second (48-5 ft./sec. = 33 m.p.h.). This figure is, of course, extraordinarily good, and probably marks the maximum ever attained by any glider. For the "Konsul" it is found that when flying with a following wind of 10 m./sec. (32-8 ft./sec. = 22-3 m.p.h.), and in a rising current of -5 m. per sec, the best gliding angle is something like 1 in 160 and occurs at a speed of 13-2 m./sec. The worst condition is, of course, gliding against a wind and in a down current. If the head wind is blowing at 8 m./sec. and the down current is -4 m./sec., the best gliding angle is 1 in 10-6, at a speed of 20 m./sec. (44 -5 m.p.h.).
THE construction of the "Konsul" is of special interest, as it might have been thought well-nigh impossible to build such a wing with sufficient rigidity against torsional stresses. The manner in which it has been done reflects credit on the designers. The monoplane wing, which is in three sections, of which the centre section is of 8 m. (26 ft. 2 ins.) span, is built up on a single spar, reinforced against torsion by covering the entire leading edge with three-ply wood. In the centre section the spar is of box section, while in the ends an I-section spar is used. As will be seen, the wing does not taper greatly in chord, but it does taper considerably in thickness, and the angle of incidence diminishes towards the tips so as to get a better load distribution and increase the aileron effect.
AN interesting feature of the "Konsul" is the interconnection of rudder and ailerons. This has been employed in order to increase the controllability, which, as a matter of fact, is reported to be quite satisfactory. For small rudder angles the ailerons are not affected, but once the rudder exceeds a certain angle the ailerons are automatically brought into play to assist the turn. Only in this way could controllability be obtained with such large span and comparatively small rudder leverage.
THE aileron control is so arranged that, when right rudder is put on, the right aileron moves up through a considerable angle, whereas the left aileron moves down through a much smaller angle. In other words, the action of the ailerons of the Darmstadt "Konsul" is very similar in principle to the de Havilland patented differential aileron control, which, for one thing, forms a convenient form of aileron balance, and also has the advantage of reducing the tendency to swing the machine into a spin, owing to the great drag on the lower aileron set up when no differential movement is provided. In the glider, however, the ailerons, in addition to their differential action, are connected to the rudder, which is not, of course, the case in the de Havilland system.
THE fuselage is of oval section, with sharp edges top and bottom. It is covered with three-ply, and the undercarriage consists of a single central skid, enclosed in fabric and sprung by rubber cords. The "Konsul" is somewhat faster than the designers bad expected, partly because the weight was greater than had been anticipated, and partly, it is thought, because the wing fabric sagged considerably between the ribs, the section being heavily cambered, and therefore the value of KL somewhat smaller than that of the sections upon which the design estimates were based. Nevertheless, we think the Akademische Fliegergruppe Darmstadt deserve the very greatest credit for their machine, especially when it is remembered that financial difficulties were very great indeed. We wish to goodness there was more of the Rhon spirit in this country. 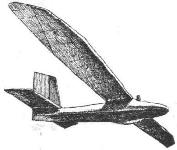 Sketch of the Darmstadt "Konsul" in flight.