THIS title covers the identity of the Military Aircraft Factory of Prague, whose chief designer is Mr. Smolik, after whom all this firm's machines are named "S," followed by the series number. The firm celebrates its five years' "jubilee" this year, having been founded in 1919, and as space has not permitted of exhibiting more than two complete machines, the "S 6" and the "S 8," scale models of the rest of the long series of Smolik types are shown. The Military Aircraft Factory, "Vojenska Tovarna na Letadla" is the oldest Bohemian aircraft factory, and was founded during the first year of the declaration of independence. Originally work was started at Kbely aerodrome, but the sheds and workshops there were burnt down, and the factory was removed to its present situation at Letnany.
<...>
The second Smolik machine exhibited is a racing monoplane, the "S.8," with Napier "Lion" engine. This machine is mainly remarkable for the fact that the wing section employed is, or appears to be, absolutely symmetrical. In actual fact it can hardly be so, as there would then seem to be too great risk of loss of lift as the neutral angle of incidence was approached. It seems probable that the section is bi-convex, but with the top camber somewhat greater than the bottom camber. The accompanying photograph gives a very good idea of the clean lines of the machine, which was finished and tested last year. Certain alterations were, however, necessary, and these have now been carried out. So far as we can gather, the machine has not been tested after the changes were made. But few particulars relating to the detail construction are available beyond the fact that the "S.8" is built mainly of metal. The length of the machine is 8-3 m. (27 ft. 2 in.); wing span, 11-4 m. (37 ft. 5 in.). Weight, empty, 1,030 kgs. (2,270 lbs.); total loaded weight, 1,230 kgs. (2,710 lbs.). The wing loading is 74-8 kg./sq. m. (15-35 lbs./sq. ft.), and the power loading 2-73 kg. (6 lbs.) per h.p. The speed is stated to be 360 km./h. (225 m.p.h.), but this is probably the estimated figure. In next week's issue we hope to be able to publish details of this machine.
<...>

THE Military Aircraft Factory, or Vojenska Tovarna na Letadla, was not, as already stated in FLIGHT, able to exhibit more than two complete machines, although the firm has produced, or has in production, a long series of types. In order to give visitors to the Prague Aero Show some idea of the types under construction or contemplated, a large number of beautifully-finished scale models were shown, covering the complete range of machines designed by the firm's chief designer, Mr. Smolik.
Of the two machines exhibited the more interesting was undoubtedly the S.8, a racing monoplane with Napier “Lion" engine. This machine has a metal fuselage composed of welded steel tubes and wire bracing, with longitudinal stringers added to give the external polygonal section. The details of the construction, although sketched from the fuselage of another machine, may be approximately realised from the sketch, as the general form of construction is very similar in the two types. In the monoplane, of course, the stringers and fairing extend over the sides as well as over the top and bottom. The form of construction is very reminiscent of German practice, and will scarcely appeal to British aircraft designers, especially the use of welding for the joints between longerons and struts.
The wings of the S.8 are of wood construction, and are fabric covered. A single strut on each side, running to the lower end of the undercarriage leg, provides the wing bracing. The monoplane wing is chiefly remarkable for the bi-convex section used, which probably has a very good L/D ratio at very small values of the lift coefficient - i.e., at very high speeds.
On the other hand, it is to be expected that the kL maximum is relatively small, so that probably the landing speed is extremely high, especially as the wing leading is in the neighbourhood of 15 1/2 lb. sq. ft. That the machine is fast cannot be doubted, and probably the estimated speed of 360 km. h. (225 m.p.h.) will be realised in practice, especially as the engine fitted is a high-compression Napier "Lion."
The undercarriage consists of two legs of N formation, the sides of which are totally covered in, as shown in one of our sketches. The rubber shock-absorbers are enclosed in a streamline casing so as to reduce head resistance. The photograph of the S.8 published on p. 362 of our issue of June 5 showed the machine in its original form, with circular nose radiator and open undercarriage legs. As exhibited the machine had the legs enclosed, and the nose radiator had been replaced by a Lamblin under the fuselage. Even this does not represent the final form, as we understand that it is intended to fit two of the new type Lamblin radiators on the undercarriage struts. The Napier "Lion" is neatly cowled in, only the exhaust pipes projecting, and the machine appears to have been about as completely streamlined as is possible. One somewhat remarkable feature of the design is the very small tail fitted. Whether or not this will prove sufficient to prevent spinning seems rather doubtful, and a larger tail would in any case be an advantage, even if the one fitted is not actually dangerously small.
<...>

The "S.8" racing monoplane of the Czech Military Aircraft Factory. This machine is fitted with a Napier "Lion" engine, and is credited with a speed of 360 km/h. (225 m.p.h.). 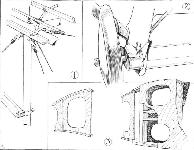 SOME SMOLIK DETAILS: Metal construction is largely employed by the Czech Military Aircraft Factory, a typical example of fuselage construction being shown in 1. 2 shows the undercarriage of the S.8, a monoplane racer with Napier "Lion" engine. Lamblin radiators, of the new strut type, are to be fitted on the chassis legs. In 3 are shown examples of wood wing construction.
<<   0/0   >>