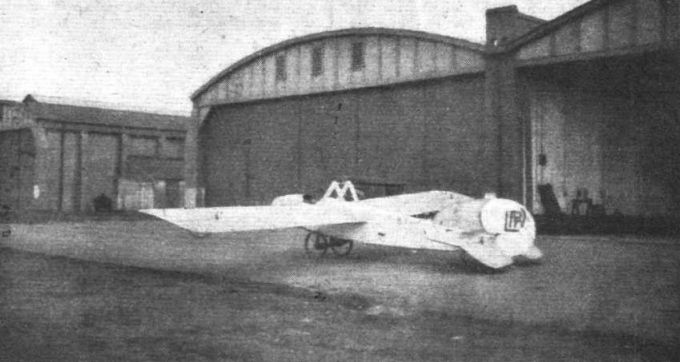 Lancashire Aero Club. - We show in the accompanying illustration a monoplane glider built by members of the Lancashire Aero Club and flown by them all last summer. This machine was in constant use from last May until September, ДальшеMore>>> and beyond minor repairs, such as one new axle, rubber cords holding same, a few new wires, no breakage occurred. The glider was slightly damaged in a crash at the beginning of September last, but was rebuilt by the end of that month. It is now stored until the club's headquarters at Woodford Aerodrome are ready. It will not be used for actual flying again, as several other gliders are to be built before the spring, but is to be fitted with a motor-cycle engine and used for "taxying." Members who have never flown before will be sent out on this machine, and so become accustomed to the feel of the "stick," the noise and wind from the engine, etc. It may be remembered that the same idea was used at the school at Hendon during the War, when the "Louse" was a special machine for this purpose.

The "L.P.W." monoplane glider, built last year by members of the Lancashire Aero Club, and which, fitted with a motor-cycle engine, will be used this year as a "taxi-instruction" 'bus.

VIEW OF SOME OF THE HANGARS ON ALEXANDRA PARK AERODROME: On the right may be seen the Monoplane Glider constructed by members of the Lancashire Aero Club
<<   0/0   >>