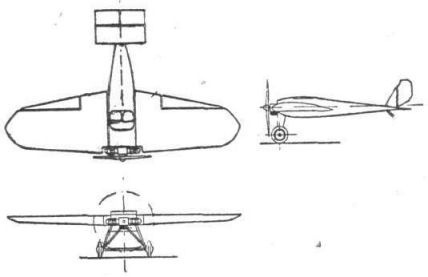 AN interesting two-seater light 'plane - or "aerial flivver" as our American cousins call it - has recently been produced by the Charles E. Lay Co., of Say brook Avenue, Cincinnati. This ДальшеMore>>> little machine, the general layout of which is indicated by the accompanying sketch-plan and elevations, was designed by Harry Heasel, chief engineer of the firm. As may be seen, the "Dixie," as it is called, is a cantilever monoplane of very clean design. It has a span of 20 ft. an overall length of 14 ft. 6 ins., and a height of 4 ft. 6 ins.
Fitted with a 40 h.p. 2-cyl. horizontally-opposed engine, the "Dixie" has a maximum speed of 100 m.p.h. and a cruising speed of 92 m.p.h. The landing speed is 25 m.p.h., and the range of action is somewhere about 500 miles. In the new model just tested a Gottingen section is employed for the wings, which have a fairly pronounced taper from root to tip; the maximum chord measures 7 ft. 6 ins.
The comparatively wide fuselage is of good streamline shape, and somewhat resembles that employed on the old Morane-Saulnier monoplanes. The two seats are arranged side-by-side, but being located in the centre of the wings we should think that the view forward in a downward direction would not be of the best.
While nothing particularly new is claimed in the "Dixie," a number of well-known and reliable combinations have been placed together, bringing out a small-sized machine that fully accomplishes expectations. Simplicity of construction; absence of wires, struts and all exterior bracings; standard accessories throughout; entirely separate engine installation; ease of assembly and adaptability as a single or two-seater, are just a few of the "Dixie's" characteristics.
It is guaranteed as to performance, materials and quality of workmanship, and it can be supplied with or without engine. In the latter case, engine installation diagrams are furnished free of charge for any class of power plant the customer may desire to install, provided it does not weigh more than 150 lbs. The range of power plants that can be used on this machine varies from 14 to 40 h.p. The "Dixie" is also supplied in "knockdown" condition, with all parts ready to fit and numbered with assembling instructions. The weight of this machine empty is 280 lbs. and the load capacity varies from 210 to 360 lbs.; the factor of safety is 9.
We understand that already several of these machines have been sold.