The Heinkel H.E.3 fitted with wheel undercarriage for land work.

THE HEINKEL H.E.18: Three-quarter rear view from above. This photograph gives an excellent idea of the lines of the machine. The engine is a Siemens.

THE HEINKEL H.E.18: Three-quarter front view. The engine is a 75 h.p. Siemens radial.

THE H.E.18 AS A SEAPLANE: The long floats do away with the necessity for a tail float. 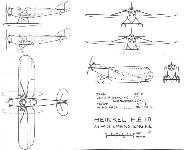