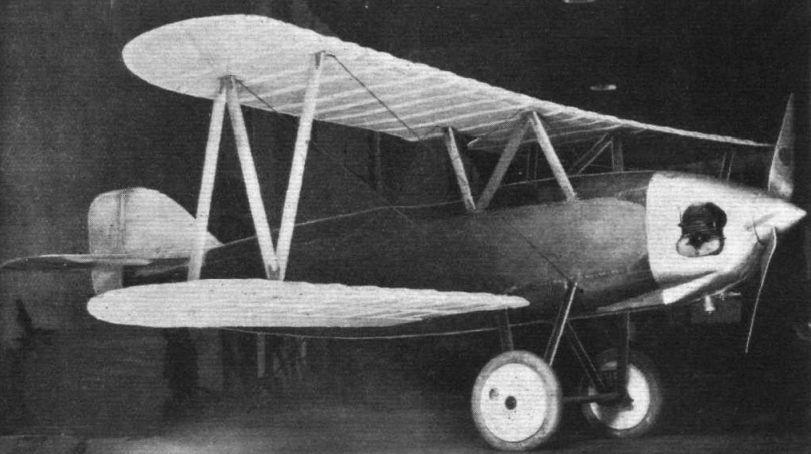 THE POWELL LIGHT 'PLANE: Three-quarter front view. Note the neat cowling around the Bristol "Cherub" engine. The fuselage is covered with ply-wood.

The Powell Light 'Plane: View of the skeleton framework of the fuselage. The undercarriage V's are made of streamline steel tubes.

THE POWELL LIGHT 'PLANE: On the left the front portion of the fuselage. The man in the cockpit gives a good idea of the small size of the machine. On the right another view of the pilot's cockpit, showing controls, undercarriage struts, bulkheads, etc.

THE POWELL LIGHT 'PLANE: Three-ply wood enters largely into the construction of the tail.

THE POWELL LIGHT 'PLANE: Some constructional features. 1. The rudder pedals which take the place of the more usual foot bar. 1a shows the sheet metal footguards to which the rudder control wires are attached. 2 is a diagrammatic perspective sketch of the elevator and aileron controls, while 2a shows, in the flat and after bending, one of the bell cranks of the aileron control. In 3 and 3a are shown the undercarriage with divided axle. The cross-member is in the form of a channel or trough-section metal strut in which the axles are housed, and which is streamlined with wood fairings. 4 shows the leather hinge used in elevator and rudder, while 5 is a bulkhead with lift wire attachments.