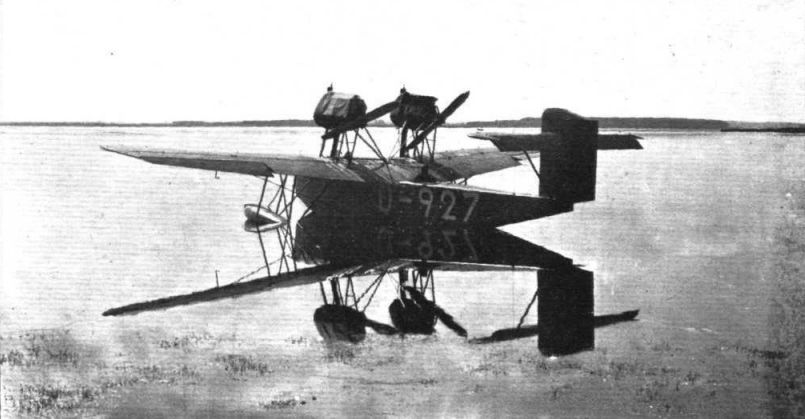 <...>
Nos. 5 and 6, the Rohrbach Ro.VII Flying-Boats, are generally similar, as regards their general design, to the Rohrbach types known in this country, of which some are being constructed under licence in this country by Wm. Beardmore's. They are, however, very much smaller, as the accompanying photographs will show, but unfortunately no data are available concerning their weight or performance. Both machines are fitted with two 230 h.p. B.M.W. IV engines, and both have the flat-sided boat hull familiar from other Rohrbach machines.
<...>

ROHRBACHS AT WARNEMUNDE: The two flying-boats with two 230 h.p. B.M.W IV engines are similar in lines to the large Rohrbach flying-boats now being built in this country by Wm. Beardmore, but are very much smaller.

A Beaching Trolley: The wheel gear of the Rohrbach is made of Duralumin and is, presumably, less cumbersome than it appears in this photograph. Note the cowling of the B.M.W. engines.

THE ROHRBACH "ROBBE": Three-quarter front view of the machine on the slipway supported on its beaching trolleys. Note the very deep and narrow hull with perfectly flat sides.

FOUR VIEWS OF THE ROHRBACH "ROBBE": This machine has just established five new world's records. Its wing loading is 17.15 lbs. per square foot. In the view of the machine taxying, the tail lis seen to be well clear of the spray. The hull has a pronounced vee bottom.
<<   0/0   >>