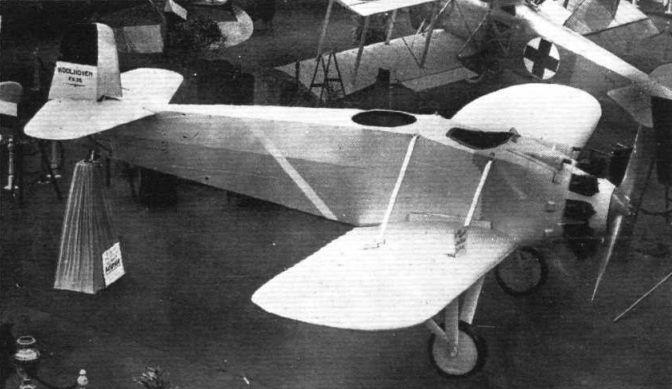 MR. FREDERICK KOOLHOVEN, who will be familiar to most of our readers from his work in England before, during and after the war, is exhibiting a very interesting little machine at the Paris Show. ДальшеMore>>> The most unusual feature of the machine, which is to be known as the type F.K. 35, is that it can be converted from monoplane into biplane and vice versa. Normally the machine is intended to be a low-wing monoplane, two-seater fighter, but for use by the air forces of smaller nations who wish to make a special study of economy, the machine can be turned into a biplane and used for reconnaissance. The fuselage is of all-metal (tubular) construction, while the wing is of wood and covered with ply-wood. The engine fitted is a Bristol Mark VI "Jupiter."
The F. K. 35, in addition to its dual form, has several remarkable features in its design, Mr. Koolhoven having ever been strong on originality. Thus, the petrol tanks, which are housed in the wings, are so suspended inside the wings that they can be dropped in case of trouble by the pulling of a lever in the pilot's cockpit. The under-carriage has a very wide track, so that there should be small risk of the machine turning over on the ground. Shock absorption is by an oleo cylinder, a type of undercarriage used by Koolhoven since about 1915.
Another interesting feature of the F.K. 35 is the mechanically operated gun-turret, which enables the gun to be used at high aeroplane speeds. Details of this cannot be given at the moment, but we hope to refer to it in detail in a later article. The armament, incidentally, consists of four guns - two Vickers and two Lewis guns. In addition, there is room in the fuselage for camera or wireless set. Ailerons are fitted to the lower plane only, and run the whole length of the span.
Specification.- Wing span, 10-5 m.; length overall, 8-6 m.; weight of machine empty, 896 kgs.; fuel, 386 kgs.; military load, 286 kgs.; total loaded weight, 1,568 kgs. Speed at 3,000 m., 260 km./hr. Climb to 5,000 m, in 14 mins. Landing speed, 88-5 km./hr.


AN unfortunate mishap prevented Mr. Frederick Koolhoven from exhibiting exactly the kind of machine he had intended to show, and as a result it may be that a certain small amount of adverse criticism may have been directed against the F.K.35 as it actually appeared at the Paris Show. In order to form a truer picture, it should be pointed out that a fuselage had been built for the F.K.35 resplendent in high show finish and truly representative of the care usually bestowed upon detail by this well-known constructor. Four days before the machine was due to leave for Paris, the Show fuselage was being taken out of one shop for transport to another, when a lorry came along and skidded into it, with disastrous results to the fuselage. For a time it looked as if our old friend Koolhoven was going to be prevented from exhibiting after all, but with his usual determination he set to work and decided that, happen what might, the F.K.35 should be shown. The skeleton of a second fuselage was almost completed, this being intended for loading tests. A council of war was held, and although most of his assistant designers, shop foremen, &c, were very doubtful whether the second fuselage could be got ready in time, Mr. Koolhoven said it had to be got ready and by working on it two days and three nights the fuselage actually was completed and the machine was sent to Paris, where it arrived in time to be fully erected and ready for inspection at the opening of the Show. Under the circumstances, however, it will be realised that one should not expect quite a Show finish, nor was the machine exhibited fully equipped, as it would otherwise have been. For all that, the little two-seater fighter attracted a good deal of attention, and, we understand that there is every likelihood that the licence to build the machine abroad will shortly be arranged for.
A general description of the F.K.35 appeared in our issue of December 2, and it will therefore suffice if we recall that the machine is normally a low-wing monoplane with fuselage of tubular construction, and an all-wood wing covered with plywood. A somewhat unusual feature of the wing is that although it has a fairly pronounced dihedral it is built in one piece, the centre fitting into a recess in the bottom of the fuselage and being held in place by a few bolts. The machine is not a cantilever monoplane, since it is braced some distance out by tubes sloping to the top rails of the fuselage, this feature having doubtless been necessitated by the fact that the undercarriage is attached to the wings in order to get a very wide wheel track. The undercarriage is of the oleo type, which has been used by Koolhoven since about 1915, with two Vees under the wings and bent wheel axles, the free ends of which engage with the Vees outside the wheels.
The Jupiter engine is neatly cowled in, and the more usual metal spinner has been supplanted by a swelling of the actual propeller boss.
The lines of the fuselage are such that a distinct break occurs in the top longerons immediately ahead of the gunner's cockpit, the longerons sloping down sharply from this point to the engine. By this arrangement the gunner is placed relatively high and could, if necessary, fire forward and upward over the head of the pilot, provided his guns were elevated sufficiently for the bullets to clear the propeller tips.
In connection with the gunner's cockpit it should be pointed out that as exhibited the machine was incomplete. The circular coaming was intended for a new gun turret which has recently been patented by Mr. Koolhoven. This gun turret is in the form of a cylinder, carrying the guns, gunner's seat, ammunition racks, etc. It is so mounted in the fuselage as to be free to rotate, and the patented feature consists in the mechanism used for operating the turning of the turret. The type of engine starter in which energy stored in a flywheel turned by hand is used for starting aero engines, is probably already familiar to our readers. The same principle has been applied by Mr. Koolhoven for turning his mechanically-operated gun turret. In this case, however, the flywheel is spun, not by hand but by means of a pedal operated by the gunner's feet. Clutch mechanisms are incorporated in such a manner that by the movement of a single lever the gunner can lock the turret in any given position or can turn it in any direction, practically irrespective of the forward speed of the machine. It is claimed that as an air fight generally lasts a few minutes only, and sufficient energy is stored in the flywheel to operate the gun turret for a much longer period, then should be no need for the gunner to speed up his flywheel during an actual fight, this being done during the intervals between fights. Details of the actual mechanism may not be given at the moment, but a diagrammatic representation of the arrangement is shown.
The Koolhoven F.K.35 weighs fully loaded 3,380 lbs., and as the wing area is 250 sq. ft., the wing loading is somewhat heavy, i.e., 13-5 lbs. /sq. ft. Consequently, it may be expected that the landing speed must be somewhat high. Thus, if a maximum lift coefficient of 0-7 is assumed, the landing speed would be in the neighbourhood of 62 m.p.h. The estimated speed of the machine at 10,000 ft. is 162 m.p.h. Presumably this performance refers to the machine as fitted with the high-compression Gnome-Rhone Jupiter.

The Koolhoven F.K.35 is a two-seater machine convertible from monoplane into biplane. The engine is a "Jupiter." The circular cockpit coaming is designed to take the new Koolhoven gun turret.

Some Koolhoven details: On the left, a view of the centre portion of the monoplane wing, showing how it fits into the fuselage. The cut out in the latter for the accommodation of the wing is shown on the right. Below is a diagram of the mounting of the Koolhoven mechanically-operated gun turret. 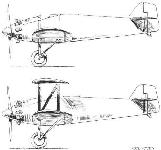 THE KOOLHOVEN F.K.35 is a "Jupiter"-engined two-seater fighter, which can be converted from monoplane to biplane and vice versa.
<<   0/0   >>