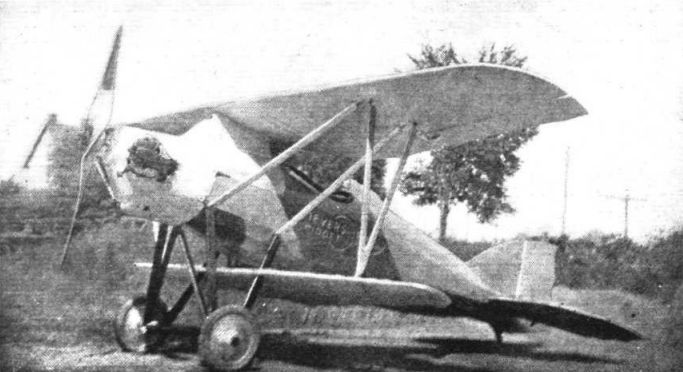 WE give this week, through the courtesy of our American contemporary Aviation, a description, with illustrations, of a recent example of a light 'plane ДальшеMore>>> developed in the "States." This machine, the Meyers "Midget," made its first appearance at the National Air Races at Philadelphia last September. In fact, it was only finished just in time for the races and actually made its first flight at the conclusion of the day's events on September 6. The "Midget" was designed by Charles W. Meyers and was constructed in the shops of the Kreider-Reisner Aircraft Company, of Hagerstown, Md., and is fitted with a British engine - the Bristol "Cherub."
Unfortunately, at the National Races the "Midget" had very bad luck and was forced down on the seventh lap of the first light 'plane race, owing to dirt collecting in the jets of the carburettor. Furthermore, owing to the extremely bad weather which had prevailed in Philadelphia, the forced landing had to be made in extremely bad ground, with the result that in doing so the machine was damaged, although not so badly, as it might have been, sufficiently to prevent it taking part in other races. However, during its first test flight, the “Midget" demonstrated that it had a very good climb and speed, and appeared to be very controllable and comfortable to fly.
The construction of the Meyers "Midget" shows considerable merit both in detail and finish. The upper and lower wings are tapered in plan form as well as in thickness, the wing section being a development of Mr. Meyers, known as M.6. The interplane bay is single, formed of a V-formation of struts, one pair on each side of the fuselage.
There is no interplane wire bracing, but two outward-sloping struts, extending, one pair on each side, from the bottom fuselage longeron to the upper wing spars at the points of attachment of the interplane V-struts. There is a 4-ft. difference in the spans of the upper and lower wings, and the chords of the two wings are accordingly proportionate. The wing spars are of channel spruce, with ribs of the same material; Warren trusses and birch gussets provide for rigidity in the structure.
The fuselage is formed of birch veneer bulkheads with a narrow veneer side, forming a girder from front to rear about one-third of the actual depth of the fuselage. Spruce longerons of L-section are arranged on each side of this plywood girder, and these form the main structural members of the fuselage. Spruce fairing strips are mounted on both the upper and lower sides of the fuselage, thus providing fairing above and below the fuselage proper, giving an oval section. These fairing strips are so placed as to take part of the vertical stresses.
A double plywood and veneer girder runs from under the seat, through the bottom and centre of the fuselage to the rear of the bulkhead, just behind the engine. This carries the pilot's seat, controls, and also provides a mounting for the lower wing and two cross-bracing members of the undercarriage structure, in addition to forming a foundation for certain cross-bracing members of the engine mount at the front end.
The engine mounting is of welded steel tubing, as are all wing struts and landing-gear struts; all struts are faired with balsa wood. The covering of the fuselage and wings is doped fabric, with the exception of that part of the fuselage at the pilot's cockpit, which is covered with veneer.
The tail unit consists of a vertical fin built into the fuselage, with the normal type of unbalanced rudder with non-rigid trailing edge. These details apply also to the horizontal stabiliser and elevators. The entire unit is constructed of spruce, the horizontal stabiliser being constructed in two sections. The tail skid is of steel tube mounted on a tiny fin below the fuselage and sprung with rubber.
The undercarriage is, as previously mentioned, of steel tube faired with balsa wood, and is of conventional V-type, the upper ends of the V-formation of struts being attached to the fuselage at the points of termination of the sloping interplane bracing struts. In addition, for rigidity, and undoubtedly providing ample strength to the undercarriage, there are two bracing struts which come to a common point of termination under the forward bulkhead at the secondary girder already referred to. The axle is sprung with rubber shock-absorber cord in the usual manner.
As will be seen from the illustrations, the support for the centre section of the upper wing over the fuselage is completely faired into the top of the fuselage. This practice is also followed in the case of the lower wing, which is actually located a little distance below the fairing of the underside of the fuselage, the mounting being completely faired. This arrangement not only gives a very neat appearance, but also enables perfect continuity of the main spars in both upper and lower wings.
The power plant fitted in this machine, as previously stated, is a Bristol "Cherub" twin-cylinder horizontally opposed engine, which is faired under a very well-designed cowling. The airscrew is an all-metal Curtis-Reed, 4 ft. 6 ins. diameter by 3 ft. 1 in. pitch. The entire finish of the machine is in Valspar.
The principal characteristics of the Meyers “Midget" are :-
Span (top) 16 ft.
,, (bottom) 12 ft.
Overall length 13 ft. 2 ins.
Area of top plane 45-5 sq. ft.
,, bottom plane 24-5 sq. it.
Total wing area 70 sq. ft.
Angle of incidence 3°.
Weight, empty 304 lbs.
,, laden 480 lbs.
,, per horse-power 16 lbs.
,, per square foot 6-8 lbs.
Speed (approx ) 100 m.p.h.
Fuel capacity 2-5 galls.
Oil capacity 3 qts.