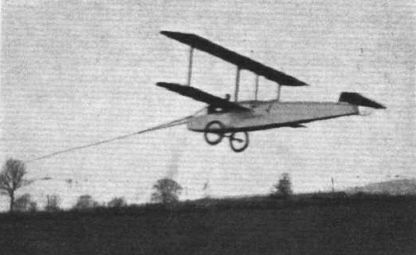 THE LINNET. Built by the Experimental Light Plane Club, under way on a towed flight.

Filling up the Linnet’s fuel tank, mounted on the top wing centre-section, prior to more attempted take-offs, presumably at Hucknall.

The uncovered but completed Linnet and, inset, after completion in mid-June 1926. The Linnet was originally designed as a glider and eventually made most of its flights towed behind a car, the engine being of insufficient power. Plans were afoot to re-engine but the Experimental Light ’Plane Club became involved with the Archaeopteryx.

A close up view of the forward fuselage of the Linnet with instruments and ABC engine installed.

EXPERIMENTAL LIGHT 'PLANE CLUB AT NOTTINGHAM: The work of this interesting club, full particulars of which were given in "Flight" for February 17 this year, is proceeding on very ambitious lines No 1 picture shows the partly-constructed tailless machine in the foreground, which is being erected entirely to the members' designs. Incidentally, these have been approved by an experienced designer wth the exception of a few minor details. On the right of No. 1, against the wall, is somebody's Westland "Widgeon"and on the left and also in the foreground of No. 3, is the Club's own-built Linnet, in which they have been experimenting with an A.B.C. engine, but not with very good results. They are anxious to get hold of another engine. In No. 2, is their taxying and general knockabout machine, the "Pink Emu." Financial and housing troubles have hampered the Club lately, but in face of this they obviously progress. The leading spirits are Mr. R.F.T.Granger and his brother. Our previous notice of their work brought them considerable technical assistance.

The completed Linnet stands behind the Pink Emu, summer 1927.

The Grangers' second glider, the Pink Emu, which was later fitted with an engine and used as a taxiing machine for practice purposes to save the Linnet from unnecessary ill-usage.
<<   0/0   >>