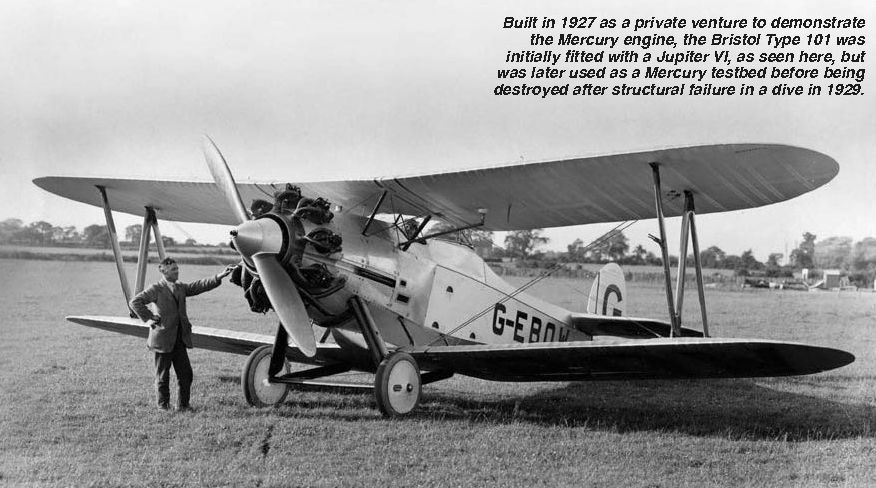 APART from forming the only British aeroplane exhibited at the Copenhagen Aero Show, the Bristol two-seater fighter biplane, Type 101, is also interesting ДальшеMore>>> in that it is an entirely new product of the Bristol Aeroplane Co. Ltd of Filton. The family resemblance to the good old "Brisfit" as may be gathered from our illustrations, is still in evidence but it will also be observed that "modern development" in aircraft design is a prominent keynote. Its general appearance is, in fact, about the most pleasing to the eye that we have come across for some time.
"Fighter 101" is a high performance two-seater fuselage tractor biplane fitted with a Bristol "Jupiter VI" engine. The wings and centre sections - the lower wings, it will be noted, extend below the fuselage, as of old - are constructed entirely of metal, whilst the fuselage is an exceptionally rigid structure of spruce reinforced with plywood. Other important features of the "101" calling for attention comprise the following :- an excellent view is obtained from the pilot's cockpit, while the range of fire for the Lewis gun from the gunner's cockpit is likewise remarkably good; an efficient and sturdy Oleo undercarriage is fitted; an adjustable pilot's seat, an adjustable rudder bar, and positive elevator control make for efficient and easy control; a simple gravity petrol system, and a self-regulating oil cooler are provided.
The wings - which, as previously stated, are of metal construction - are of equal span, with forward stagger and single bay bracing. A feature of their design is the method of mounting the main ribs to the spars by detachable posts. The wing spars are built up of rolled-steel strips riveted together, and are of Bristol standard spar section. Bristol-Frise ailerons are fitted to the lower planes, which give an improved rolling moment and a decreased yawing moment over the whole range of flying speeds. Both lift and landing wires are duplicated, and the compression members are steel tubes; the interplane struts are of the N-pattern.
The tail plane is a wooden cantilever structure mounted on the top of the fuselage, having two spars of the box type of spruce and plywood. Eyebolts, which pass through the front spar and connect to fittings on the fuselage, form a pivot point for the tail incidence adjustment, this adjustment being effected from the pilot's cockpit through a lever (on pilot's right) and cables connected to cranks on a short transverse tube through the fuselage.
The elevators are controlled by a series of three control tubes, which operate a cross tube running through the tail plane. On the ends of this cross tube are crank levers, spigots on the ends of which work in slots cut in the end ribs of the balanced portions of the elevators.
The fuselage consists of a frame structure of spruce members reinforced with plywood and steel-plate fittings. Those bays which are not covered - that is, on the top and bottom of the rear portion of the fuselage - and the internal bays do not bear directly against the longerons, but the ends are fitted into recesses formed in spruce packing blocks, which are themselves attached to the longerons. A fireproof bulkhead is provided behind the engine section.
The pilot's cockpit is located near the top-plane trailing edge, and immediately behind is the gunner's cockpit. This has a Scarff ring, carrying the Lewis gun, mounted on a plywood structure. Both the pilot's seat and the rudder bar are adjustable; a small handle on the side of the seat regulates the height by moving the legs that support the seat, while the rudder bar may be brought near to, or put farther from, the seat without moving any part of the controls.
A V-type undercarriage is employed in which the front struts carry the Oleo absorbers, giving a travel of about 8 ins. The oil piston in each strut has a constant leak, providing a damping of the travel in both directions. Fitted above the oil chambers are compression rubbers and steel springs; compression rubbers are also used in the tail skid.
As previously stated, petrol is fed entirely by gravity; two petrol tanks, of 29 gals, capacity each, are mounted in the top wings, while a third tank, of 20 gals, capacity, is located in the upper portion of the fuselage immediately behind the fireproof bulkhead. A petrol filter is mounted, at the lowest point of the fuel system, on the front face of the fireproof bulkhead, below the engine mounting.
The oil tank is mounted in the fuselage, below the petrol tank, and underneath it is a self-regulating oil cooler. This latter keeps the oil delivered to the engine at an even temperature by automatically controlling the flow of oil through the cooling space.
The armament of this machine includes two 0-303 Vickers guns mounted on either side of the fuselage, with belt boxes accommodating 1,200 rounds of ammunition, and a Lewis gun mounted on a Scarff ring with five double drums of ammunition; the Vickers' guns are operated by C.C. gear. Provision is made for pilot's and gunner's parachutes, Verey pistol and cartridges, and oxygen apparatus.
The principal characteristics of the Bristol Type 101 are :-
Span (both planes) 33 ft. 7 ins.
Chord 6 ft. 0 ins.
Gap 5 ft. 3 ins.
Wing area 320 sq. ft.
Angle of incidence 3°
Dihedral angle 4°
Stagger (at leading edge) 3 ft. 0 ins.
Weight empty 2,100 lbs.
Weight laden 3,540 lbs.
Weight per sq. f t. 11-06 lbs.
Weight per b.h.p. 7-85 lbs.
Speed range 60-140 m.p.h.
Climb to 10,000 ft. 9 mins.
Climb to 20,000 ft. 30 mins.
Service ceiling 21,000 ft.

Built in 1927 as a private venture to demonstrate the Mercury engine, the Bristol Type 101 was initially fitted with a Jupiter VI, as seen here, but was later used as a Mercury testbed before being destroyed after structural failure in a dive in 1929.

A NEW BRISTOL FIGHTER: Two views of the Bristol Type 101 two-seater fighter, fitted with a Bristol "Jupiter VI" engine. This machine is being exhibited at the Danish Aero Show, which opened at Copenhagen on Saturday, August 20.