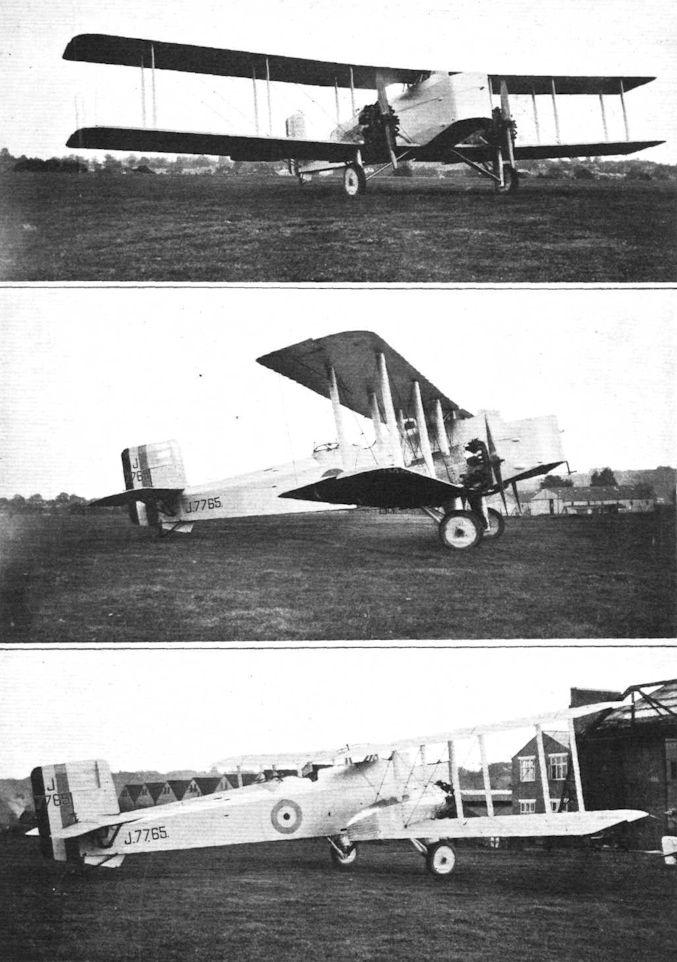 CLASSED in the Air Ministry lists as a three-seater fighter, the Westland "Westbury," designed and built by the Westland Aircraft Works of Yeovil, could readily be adapted for use ДальшеMore>>> as a high-performance bomber, in spite of the fact that it was originally designed as a gun carrier and mounted two heavy calibre guns. In general design the "Westbury" is a normal three-bay biplane, with two Bristol "Jupiter" engines mounted on the wings. In the detail design, however, several interesting features are revealed on a closer inspection.
For instance, the fuselage is built up of three separate units, bolted together at the longerons. The forward unit is an all-wood structure of spruce with ply-wood covering, and contains the forward gun turret. This turret carries the rotating platform and gun mounting, and the platform and mounting can be rotated inside the cockpit by means of a hand wheel. It is self-locking in any position, and to rotate the mounting it is necessary to release the brake by means of a pedal. The fact that the whole "nose" forms a separate unit enables replacement of the turret in case of damage, such as might be caused, for instance, by the machine "nosing up" on rough ground.
The second unit is the central portion of the fuselage, from the pilot's cockpit to aft of the rear gunner's cockpit, and is a steel tube structure. Finally, the aft portion of the fuselage is a normal braced girder structure of spruce and wire, bolted to the four steel tube longerons. Thus the entire rear portion can be easily detached from the central unit.
The deck fairing is attached to the longerons by means of clips, and that portion of it which lies aft of the rear gun is made easily detachable. Moreover, two distinct types of deck fairing are provided, the one for use when the machine carries the gun ring, and the other a plain fairing without the gun ring. The substitution of one fairing for the other can be carried out in a few moments. Normally there is, in addition to the aft gun, a lower Lewis gun mounting which enables the rear gunner to fire under the tail. A passage from the lower Lewis gun position runs forward to the front gun turret, so that any member of the crew has direct access to any other compartment. By the same passage the pilot can reach his cockpit, or he can use the foot holes in the sides of the fuselage and go along the "cat walk" on the top centre-section.
The wireless apparatus is fitted inside the fuselage, between the rear gunner's position and the pilot's cockpit. The instruments are mounted on a removable panel on the starboard side, and a small tip-up seat is provided for the operator.
The "Westbury" has been constructed both with normal wooden wings and with a mixed type of wing construction using Duralumin spars and wooden ribs.
The tail surfaces are of normal design, with the tail plane incidence gear of the Westland patented type. It will be observed that the bracing struts to the tail plane are below, so that the field of fire above the tail is particularly unrestricted.
Normally the "Westbury" is fitted with two "Jupiter" Mark VI engines, but if desired, the machine can be equipped with the geared "Jupiter VIII," or with supercharged engines. The engine mountings are of steel tubular construction, and are fixed on the lower inner plane sections. In addition to the engines, the mountings carry the petrol and oil tanks, starting magneto and primer. The mountings project well forward of the leading edge of the wing, so that the engines are very accessible.
Owing to the unit construction of the fuselage, and to other features of the design, the "Westbury" is particularly easy to transport by rail, as there is no necessity to dismantle the engines, which can be left on their mountings with the inner wing sections. All parts of the machine can be got into standard railway trucks.
The "Westbury" is reported to be very pleasant to fly, and will handle well with one engine cut out. In fact, it not only flies level on one engine, but can actually be turned quite easily against the running engine.
Following are the main data relating to the Westland “Westbury”
Length over all 43 ft. 4 3/4 in. (13-2 m.).
Wing span 68 ft. (20-8 m).
Height 13 ft. 9 in. (4-19 m.).
Wing chord 7 ft. (2-13 m.).
Wing area 875 sq. ft. (81-3 m2).
Weight light 4,845 lb. (2,200 kg.).
Disposable load 2,763 lb. (1,256 kg.).
Total loaded weight 7,877 lb. (3,580 kg.).
Wing loading 9 lb./sq. ft. = 44 kg/m2.
Power loading 8-76 lb./h.p. = 3-98 kg./h.p.
Speed at 5,000 ft. (1,525 m.) 125 m.p.h.(201 km/h)
Speed at 10,000 ft. (3,050 m.) 122 m.p.h.(196-5 km/h)
Speed at 15,000 ft. (4,575 m.) 113 m.p.h.182 km/h)
Climb to 5,000 ft. (1,525 m.) in 4 1/2 mins
Climb to 10,000 ft. (3,050 m.) in 10 mins.
Climb to 15,000 ft. (4,575 m.) in 19 mins.
Service ceiling 21,000 ft. (6,400 m.).
"Everling Quantities” (Metric).
High speed figure 13
Distance figure (top speed) 3
Altitude figure (ceiling) 4-8

A THREE-SEATER FIGHTER: The Westland "Westbury," fitted with two Bristol "Jupiter" engines, can also be converted into a high-performance bomber.

THE WESTLAND "WESTBURY": This view shows the mounting of the starboard "Jupiter," and also the forward cockpits, &c.

Two artists’ impressions of the COW gun mounted flexibly in the nose of the Westland Westbury.
<<   0/0   >>