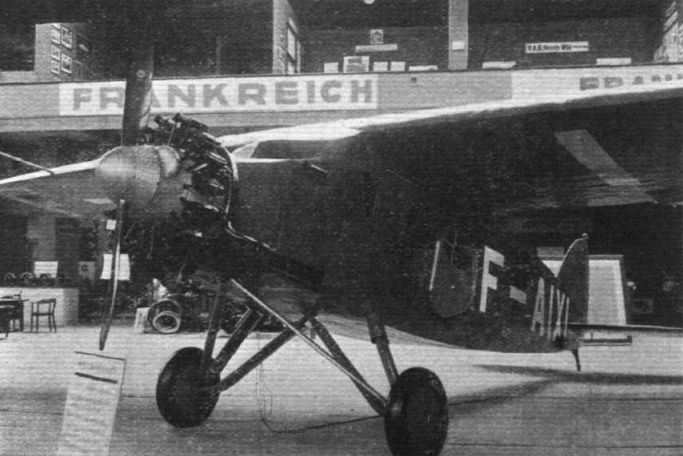 A newcomer in the "feeder line" class at Berlin is the Nieuport-Delage type 640 exhibited by the Nieuport-Astra firm. Designed for use either as a passenger machine or a small ДальшеMore>>> goods carrier the type 640 is a high-wing monoplane with wing of elliptic plan form and bi-convex section, tapering in thickness from root to tips.
Like most small passenger monoplanes of recent production, the Nieuport-Delage 640 is designed to carry four passengers, and the pilot is placed ahead of the wing, behind a sloping windscreen, the function of which is the double one of protecting the pilot and deflecting the air upwards over the wing so as to avoid eddy making.
The cabin is somewhat small, and there is naturally not the 6 ft. headroom which one associates with larger passenger-carrying machines. As the type 640 is not, presumably, intended for use on very long routes, this probably does not matter greatly. The seats are comfortable and the view not too bad, although the windows are not very large. The cabin is entered by a door in the port side, and there is also a door communicating with the pilot's cockpit. Aft of the cabin is a small luggage compartment, the door of which is of very shallow depth, but ample width, and placed in the starboard side. This door is fastened by "meat skewers" in the old-fashioned way.
The Nieuport-Delage 640 is of all-wood construction, even the wing being covered with ply-wood. The rear portion of the fuselage is covered with a single thickness, but the cabin walls have a double thickness of ply-wood covering.
As already mentioned, the monoplane wing is of elliptic plan form. It is claimed that this, in conjunction with a large span, makes the wing very efficient and helps to give a large surplus of power.
The undercarriage is of the "Split" type, and is somewhat unusual in that the radius rods and bent axles are hinged to the centre line of the fuselage floor, while the telescopic member runs to the lower longeron. The shock absorbing medium is in the form of rubber blocks working in compression.
The engine fitted in the actual exhibition machine is a Wright "Whirlwind,” but it is stated that any radial air tooled of from 230 to 300 b.h.p. can be fitted if desired, the engine mounting being designed as a complete unit, attached to the main fuselage structure at four points only.
The main dimensions of the Nieuport-Delage 640 are: length over all, 9-45 m. (31 ft.); wing span 15-4 m. (50-5 ft.); wing area, 30-87 m2 (332 sq. ft.). The tare weight is 1,050 kg. (2,310 lbs.), and the permissible load of 700 kg. (1,540 lbs.) is made up as follows: Fuel and oil, 200 kg. (440 lbs.); general equipment 40 kg. (88 lbs.); disposable load, 460 kg. (1,012 lbs.) Total loaded weight, 1,750 kg. (3,850 lbs.). The maximum speed near the ground is 192 km./h. (119 m.p.h.), and the cruising speed 130 km./h, (81 m.p.h.). The landing speed is given as 84-92 km./h. (52-57im.p.h.). Climb to 1,000 m. in 5 mins. 12 secs. To 4,000 m. (13,100 ft.) in 31 m. 30 secs.

Nieuport-Astra at Berlin: The Nieuport Delage type 640 is also a "feeder line" type of very compact design. The engine is a Wright "Whirlwind."

On the French stand: In the foreground the Nieuport-Delage commercial monoplane. In the extreme corner, a wing tip of the Potez 32. In the centre, the old Breguet "Nungesser-Coli." To the right of that the small Farman monoplane. And at the back, the Bleriot 111 and the fuselage of the Farman twin-engined machine. 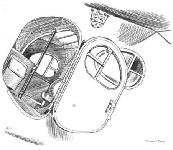 The cabin of the Nieuport-Delage type 640 has four seats, and is entered through a door of rather small dimensions.

A SAFETY DEVICE: The door handle on the Nieuport-Delage is provided with a neat catch which prevents accidental opening of the door during flight.
<<   0/0   >>