We do not recollect having previously heard of Gebruder Muller, of Griesheim, near Darmstadt, but evidently the firm has been in existence for some time, as the little monoplane exhibited ДальшеMore>>> is the second type to be produced, the first, type G.M.G. I, having been used by the Rhon-Rossitten Gesellschaft. The second machine, type G.M.G. II, is of somewhat unusual design, but shows excellent workmanship and a good finish.
Fitted with the old Anzani "Y" type of engine, developing some 30 h.p., the Muller monoplane has quite a respectable performance, and appears to deserve a better power unit. The performance figures given at the end of these notes are stated to have been determined by the Deutsche Versuchsanstalt fur Luftfahrt, and may therefore be accepted as correct. In view of the low power, a top speed of 84 m.p.h. is by no means bad, while a climb to 3,280 ft. in 7-6 mins., with two on board, is very creditable indeed.
The G.M.G. II is of all-wood construction, the fuselage being covered with plywood, and the wing partly covered with this material, which extends from the leading edge to back of the single main spar, the rest of the wing surface being fabric.
An unusual arrangement of wing attachment has been employed, the wing being bolted to a sort of bridge which runs over the top of the two cockpits. This bridge, which forms a part of the fuselage structure, is necessarily very strong in order to take the weight of the machine, and should offer good protection for the occupants in case the machine turns over on the ground, not an unlikely happening with the primitive undercarriage fitted to the machine. Another advantage of the "bridge" attachment of the monoplane wing is that it has become possible to provide doors to the two cockpits without seriously affecting the strength of the fuselage. Thus, although the wing is low over the ground, it is possible to step into the cockpits without the necessity for the acrobatic skill which is demanded in so many small aircraft.
Muller Brothers have adopted the wing construction which has become more popular in Germany than anywhere else: a single main spar which, with the ply-wood leading edge, forms a tube of "D"-section, said to be very strong in torsion, as well as in bending. In the Messerschmitt machines the wings thus built are pure cantilevers. In the Muller G.M.G. II, a single strut is used on each side to brace the wing. This means, of course, that although the bending stresses may he .somewhat relieved by the use of a single strut, the torsional loads have to be taken entirely by the D-section spar.
The inverted "Y" type of Anzani engine lends itself particularly well to installation in this machine, because of the narrowing-in of the fuselage at the "bridge" and from it forward to the nose, the fuselage cross-section thereby assuming a form roughly conforming to the front elevation of the Anzani engine. The forward view thus becomes fairly good, although one would imagine that the rear cockpit at any rate must be fairly draughty. The petrol tank is placed in the upper portion of the fuselage, between the fireproof bulkhead and the front cockpit. The height is sufficient to give gravity feed, but one would have preferred to see the tank placed farther away from the engine and occupants.
The Muller G.M.G. II has an overall length of 6 16 m. (20-2 ft.) and a wing span of 11 m. (36-1 ft.). The wing area is 16 sq. m. (172 sq. ft.). Tare weight 275 kg. (605 lbs.); permissible load, 225 kg. (495 lbs.). Total loaded weight, 500 kg. (1.100 lbs.). The maximum speed is 136 km/h (84 m.p.h.), and the cruising speed, 130 km./h. (81 m.p.n). Landing speed, 60 km./h. (37 m.p.h.). Climb to 1,000 m. (3,280 ft.), in 7-6 mins. with full load, and in 4-5 mins. with pilot only. Duration at full throttle, 5 hrs., giving a range of 420 miles.

A SOMEWHAT UNORTHODOX DESIGN: The Muller G.M.G. II has its monoplane wing attached to a "bridge" running over the top of the cockpits. 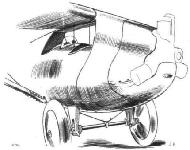 In the little Muller monoplane the roof of the fuselage runs across the cockpits, and the wing is attached to this "bridge." The undercarriage is somewhat elementary, and the narrow wheel track might result in "cartwheeling" on the ground in a strong wind.
<<   0/0   >>