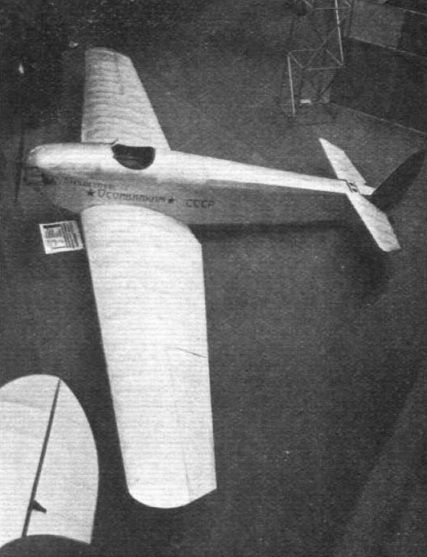 Of the five machines exhibited by Soviet Russia three were light planes: The Aviatrust U2 100 h.p. biplane, the Ossoaviachim "Burewestnik" low-wing monoplane single-seater, and the "Tri ДальшеMore>>> Druga" two-seater high-wing monoplane, also designed and built by the Ossoaviachim Co. Both the latter machines had flat-twin air-cooled engines which appeared to be of a size to develop some 20-30 h.p. Unfortunately no detailed information was available other than that given on placards exhibited on the stand.
<...>
The "Burewestnik" (Stormy Petrel) low-wing monoplane was similar in a general way to the little Klemm monoplanes, and was like them of all-wood construction, although the wing was fabric covered. The undercarriage was unusual in that the axle was in the form of a curved member of wood, probably laminated to form a spring, and carried wood wheels with flat leather tyres. The arrangement of the undercarriage is illustrated in one of our sketches
Following are the main dimensions, weights, &c, of the "Burewestnik": length overall 6 m. (19-7 ft.); wing span 9 m. (29-5 ft.). Tare weight, 150 kg. (330 lbs.); total loaded weight, 270 kg. (594 lbs.). Maximum speed 155 km./h. (96 m.p.h.). Ceiling, 7,000 m. (23.000 ft.). The performance figures appear somewhat optimistic, but possibly the engine develops more than the power assumed.
<...>

BOLSHEVIK UNORTHODOXY: One of two unusual undercarriages on Russian light 'planes. The wood spring axle and ply-wood covered leather-tyred wheels of the low-wing monoplane "Burewestnik." Inset, details of the attachment of axle to fuselage.
<<   0/0   >>