Of the five machines exhibited by Soviet Russia three were light planes: The Aviatrust U2 100 h.p. biplane, the Ossoaviachim "Burewestnik" low-wing monoplane single-seater, and the "Tri ДальшеMore>>> Druga" two-seater high-wing monoplane, also designed and built by the Ossoaviachim Co. Both the latter machines had flat-twin air-cooled engines which appeared to be of a size to develop some 20-30 h.p. Unfortunately no detailed information was available other than that given on placards exhibited on the stand.
<...>
The "Tri Druga" high-wing monoplane was a two-seater, and like the "Burewestnik" was characterised by an unusual undercarriage, although of quite different type. In the "Tri Druga" each wheel was supported on a streamline strut hinged to the lower longeron. A streamline wire connected the wheel centres, and incorporated rubber compression blocks. When the load is taken by the wheels, these move outwards, and in so doing tighten the wire and compress the rubber. The details are shown by sketches.
The "Tri Druga" had a length of 6-92 m. (22-7 ft.) and a wing span of 12 m. (39-4 ft.). The tare weight was 245 kg. (539 lbs.) and the gross weight 417 kg. (906 lbs.). The top speed claimed was 127 km./h (79 m.p.h.) and the ceiling 5,250 m. (17,200 ft.). A placard on the stand stated that this little two-seater had flown 10.800 km. (6,700 miles).

A Russian low-power two-seater: The "Tri Druga" (three friends) is a high-wing monoplane, strut braced, and mainly of wood construction. 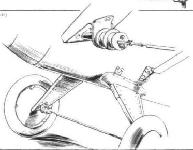 BOLSHEVIK UNORTHODOXY: One of two unusual undercarriages on Russian light 'planes. The unusual springing on the strut-braced parasol monoplane "Tri Druga." The undercarriage struts are free to rock slightly from side to side, and the "axle" takes the form of a streamline wire stretched between wheel centres. Under load the wheels move outwards, stretch the wire and thus compress the rubber block shock absorbers.
<<   0/0   >>