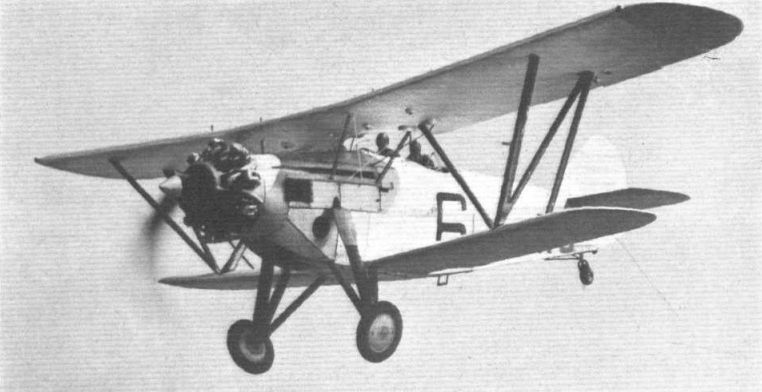 ALL the latest forms of metal construction are incorporated in this entirely new Bristol machine. The 118 is a general purpose aircraft fitted with a Bristol "Jupiter X.F" engine of 480 ДальшеMore>>> h.p. From the photograph it will be noted that the fuselage is of very large cross-sectional area, which means that there is a great deal of room inside, a very desirable condition in a general purpose machine which has to carry an exceptionally large equipment. The wing bracing is unusual in that no wires are used (except for centre-section struts). The undercarriage is of the "divided" type and the wheels are fitted with brakes.
The Bristol 118 has a wing span of 46 ft. 7 in. (14.2 m.), and its total flying weight is 5,200 lb. (2,360 kg.). The endurance is 1/2 hour at ground level plus 2 1/2 hours at 15,000ft. (4,600 m.). The landing speed is about 60m.p.h. (96 km. h.) and the estimated maximum speed at 15,000 ft. is more than 160 m.p.h. (258 km./h.).

IN countries all over the world there is a call for an aircraft of high performance, designed and equipped not only for a specialised purpose, but capable of carrying out with sound efficiency the many duties an aircraft may be required to perform. For some considerable time past the question has been one which has received the close attention of the "Bristol" design and development departments, and the Type 118 is the result.
Normally carrying a crew of two, a pilot and an observer - the latter also carrying out the duties of rear gunner, bomber and wireless operator - the machine can also carry, in addition, two stretcher cases, so that it can be used as an ambulance aircraft for the evacuation of sick and wounded, as well as for its active fighting functions. One stretcher case is accommodated in the bombing station, and the second on the top of the fuselage aft of the rear cockpit.
The machine is a two-seater (single-engined) tractor biplane, with staggered planes, the top plane having a larger span and chord than the lower. "Frise" ailerons are fitted to the top planes only. The tail-plane setting is adjustable. Shielded horn balances are incorporated in the elevators, and the rudder balance is shielded by the fin, which is offset. Brakes are fitted to the undercarriage, which is of the divided type. A Bristol "Jupiter" X.FA. or a Bristol "Mercury" engine is installed, driving a 12-ft. diameter two-bladed propeller.
A crew of two is normally carried: A pilot, and an observer who also carries out the duties of rear gunner, bomber and wireless operator. The pilot is seated just aft of the top centre section trailing edge, and the observer's cockpit is immediately behind the pilot's. With the seat folded and the floor pushed aft in slides, the observer can reach the bombing station through a "tunnel" beneath the pilot. This station is in the nose of the machine, immediately aft of the engine mounting. In addition to the crew, two "stretcher cases" may be carried, one in the bombing station and one on the top of the fuselage aft of the rear cockpit. A section of the fairing is made quickly detachable to accommodate the latter.

Guns. - One Vickers 0.303-in. gun on the port side is operated by the pilot, and provision is made for 600 rounds of ammunition. The gunner operates the Lewis 0.303-in. gun mounted on a balanced-type Scarff ring, with stowage for six double drums of ammunition.
Bombs. - Racks are provided on the bottom of the fuselage for carrying alternative loads of bombs, namely, (1) 16 of 20 lb., or (2) four of 112 lb., or (3) two of 230 lb. or 250 lb. In addition five practice bombs are carried in a crate beneath the fuselage. Both pilot and bomber are provided with salvo-selector release gears.
Camera. - Provision is made to carry a type P.24 camera on an adjustable and detachable mounting, immediately forward of the bombing station. This can be operated from the bombing station or by the pilot.
Wireless. - The "three-panel" system is provided for, and stowage arranged aft of the rear cockpit. The pilot operates the radio-telegraph panel through remote controls, and the observer the continuous wave and interrupted continuous wave panels.

Airscrew. - A two-bladed wooden propeller of 12-ft. diameter and 10-ft. pitch.
Engine Cowling. - This is in the form of readily detachable panels, mounted on rigid steel tubular framing.
Exhaust System. - A special exhaust collector ring is fitted with two tail pipes.
Engine Mounting. - The engine is bolted to a forged and turned ring of angle section, attached to the fuselage by steel tube struts and stays. Taper bolts are used throughout, and the mounting is quickly detachable.
Fireproof Bulkhead. - A panel of 1/8-in. thick asbestos between two sheets of 24 S.W.G. aluminium.
Fuselage. - Fore end: From aft of the engine mounting to rear of gunner's cockpit, built of round steel tubing bolted between flat high-tensile steel joint plates. Rear end: From aft of gunner's cockpit to front spar of tail plane, built of high-tensile steel strip sections riveted to flat high-tensile steel joint plates. Stern wedge: The rear end structure carrying fin, tail skid and rudder is of construction similar to that of the rear end. By removing four bolts this wedge may be quickly detached from the fuselage.
Undercarriage. - Divided type, each half consisting of a wheel (800 x 150), axle, radius rod, and oleo leg. A Vickers oleo pneumatic unit is incorporated in each oleo leg. Vickers hydraulic brakes are operated by a hand lever, and differential braking is obtained through a valve box operated by the rudder bar.
Tail Skid. - A telescope member, hinged to the fuselage at the top end, is restrained at the lower end by a "Vee" shaped radius rod. Rubber compression blocks provide the springing for this member, which is fitted at its lower end with a swivelling pan which can be quickly replaced.
Wings. - The top surface consists of a centre section and two detachable planes. The lower planes attach direct to the fuselage.
Top Centre Section. - Front spar built up of high-tensile steel strip. Rear spar of high-tensile steel tube. Ribs built of high-tensile steel channel sections, with "Warren" type bracing members. Drag bracing of tubing. The section is thinned down to improve pilot's view. Two emergency fuel tanks are housed in outer ends.
Wings, Upper and Lower. - Spars are built up of high-tensile steel strip. Ribs are built of high-tensile steel channel sections, with "Warren" type bracing. Drag bracing of high-tensile steel tubing. A main fuel tank is housed in the inner end of each top wing.
Centre Section Struts. - Of streamline section steel tubing braced by streamline wires.
Wing Struts. - Each "side" consists of an "N" incidence frame and one lift strut. The "N" struts are built up of high-tensile steel strip, with aluminium fairings, while the lift strut is built up of two separate high-tensile steel strip sections.
Ailerons. - These are of the "Frise" balanced type, and are fitted to top wings only.
Tail Plane. - This is of cantilever form (in one complete unit) attached to the fuselage at two points on front spar, about which it hinges. The rear spar is anchored through an adjustable screw jack. Both spars are of steel tubing, and the ribs are built up of high-tensile steel strip channel sections.
Elevators. - Each elevator is a separate unit, the two being bolted together at the inner ends of the spars. Horn balances are shielded over small angular movements by the tail plane.
Fin. - A cantilever structure of steel tube and duralumin. This is set over on the fuselage to counteract slipstream effect. The fin is sufficiently thick to shield rudder balance over small angular movements.
Rudder. - Balanced type, with tubular rudder post and edging, and duralumin sheet ribs. Hinged at three points.
Petrol System. - Gravity. Normal capacity, 100 gallons. Total with emergency supply, 160 gallons. The normal supply is carried in two tanks of 50 gallons each, one in each inner end of top wings. The extra supply is carried in two tanks of 30 gallons each in the top centre section. All tanks are of tinned steel, are fitted with contents gauges, cocks (controlled from cockpit), and "hand-hole" sump, and are easily detachable. From each tank a "Monel" metal feed pipe leads to a manifold at the forward end of the fuselage. At the lower end of each pipe is another cock, under the control of the pilot. A single "Petroflex" pipe leads from manifold to filter, and another from filter to carburettor.
Oil System. - A tinned steel tank, holding 10 gallons, is mounted on the forward end of the fuselage. A combined cock and drain plug is fitted in the supply pipe to engine. The oil is returned to tank through a separate cooler mounted on the port side of the fuselage. This cooler consists of a series of oval section tubes, connected in parallel, protruding through the side covering of the fuselage. An adjustable spring-loaded valve bypasses the oil until a normal working temperature is reached.
Controls. - A standard type of control column is fitted for elevator and aileron control. The foot control has a 4-m. quick adjustment fore and aft, without altering cable lengths. A large diameter hand-wheel operates the tail adjustment. This is provided with an indicator. Engine control is by push-pull rods, except at the fire-proof bulkhead, where "Arens" control units are used.
Seating. - The pilot's seat is adjusted over a height of 4 in. by means of a lever on the starboard side, and is shaped to house the seat-type parachute. The gunner's seat faces aft, and can be folded up clear of the cockpit.
Guns. - The Vickers gun is fitted on the port side of the pilot's cockpit, on an adjustable mounting. The ammunition box, holding 600 rounds, can be filled in position, or quickly lowered into the bombing "tunnel.” The Lewis gun is mounted on a balanced type Scarff ring, and pegs are provided for stowing six double drums of ammunition.

STRUT-BRACED: The Bristol Type 118 has a somewhat unusual arrangement of its wing bracing. The engine is a "Jupiter" Series X.FA. 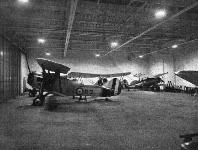 LIGHT ON INDUSTRY. A corner of the erecting shop in the Bristol Aeroplane Company's factory, lit by G.E.C. Osira electric discharge lighting.

THE BRISTOL TYPE 118: This side view gives a good idea of the general lines of the machine.
Type 120

THE PARROT CAGE: The Bristol 120 ("Pegasus") has a celluloid wind covering over the rear gunner's cockpit. 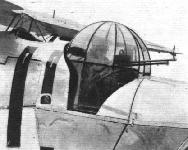 GENERAL PURPOSES: These diagrams illustrate how the Bristol Type 118 came to be classed as a G.P. Aircraft.