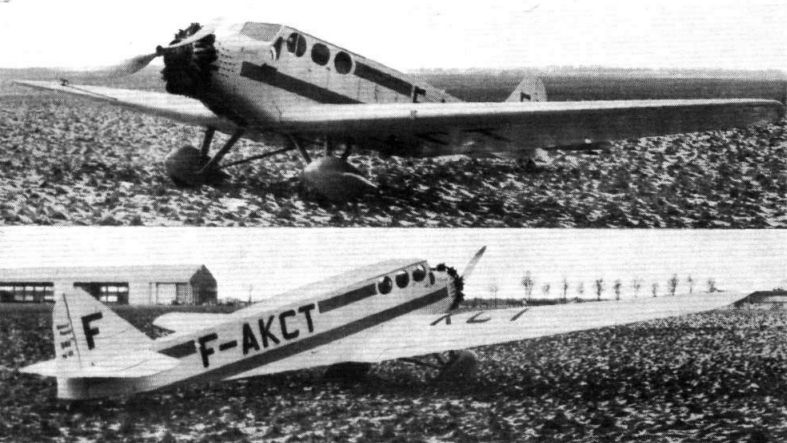 FOLLOWING the successful introduction of his all-metal tri-motor, low wing transport monoplane, the 280 T, equipped with Gnome-Rhone 300 h.p., K.7, air-cooled motors, Mr. Michael Wibault has designed ДальшеMore>>> the 360 T. 5., a single engine tourist monoplane, which has just completed its series of tests at the Service Technique Aerodrome of Villacoublay, where it was presented by the constructors, the Chantiers Aeronautiques Wibault-Penhoet.
This plane has been specially designed for tourist use and also for light passenger and postal work on the air line systems, where economical speedy operation is desired. Of a low, thick wing of the cantilever type, this machine is constructed entirely of metal, and has accomodation for 5 people, including the pilot. It is designed to be equipped with a 230 h.p. Salmson air-cooled motor, or a 300 h.p. Gnome-Rhone air-cooled engine can be mounted, a considerable increase of speed being attained, with the latter motor.
The detachable wings consist of a centre section, which forms an integral part of the fuselage, and to which the main wings are joined on each side in cantilever fashion. These are of trapezoidal form and mounted at a marked dihedral angle. The two longerons used in the construction of each wing are made of duralumin, and all the internal bracing throughout is of that same metal, while the wings themselves are covered with duralumin sheet. The construction of the tail is similar to that of the wings.
The fuselage is also of metal construction throughout, covered with duralumin sheet. The cabin, which is lighted by three large ports on each side, is furnished in the style of an automobile. There are two seats in front, placed side by side, the one on the left being occupied by the pilot, alongside of whom is a passenger. Three comfortable chairs are installed behind them. A good sized compartment, which has a capacity for 165 lb. (75 kg.) of baggage, has been constructed just aft of the cabin.
The landing gear is of the split axle type, fitted with oleo-pneumatic shock absorbers and brakes. The wheels are covered with stream-lined "spats," and the tail skid consists of a small wheel equipped with a hard rubber tyre and mounted in a free turning socket.
The following performance figures were obtained at the official trials at Villacoublay, with full load and 230 h.p. Salmson engine :-
Altitude Time of Climb Maximum Speed R.P.M. of motor
0 - 202,88 k.p.h. (126 m.p.h.) 1,715 r.p.m.
1,000 metres 5' 51" 199,50 k.p.h. (124 m.p.h.) -
2,000 12' 20" 196 k.p.h. (122 m.p.h.) 1,670 r.p.m.
3,000 21' 30" 191,5 k.p.h. (119 m.p.h.) -
4,000 34' 13" 184,5 k.p.h. (115 m.p.h.) 1,625 r.p.m.
5,000 55' 06" 174 k.p.h. (108 m.p.h.) 1,590 r.p.m.