DESIGNED by Mr. F. G. Miles and built for him by George Parnall & Co. at the works at Yate, Glos, the Miles "Satyr" is a little single-seater biplane of orthodox design and construction. With its small dimensions, low weight ДальшеMore>>> and small moments of inertia, it should be a really "snappy" little machine, very suitable for aerobatics, etc., and with a performance high enough to suit most people.
The "Satyr," which is shown in skeleton in the photographs above, has been finished since the photographs were taken, and is now only awaiting better weather conditions for its preliminary flight tests. In fact, it is probable that by the time this week's issue of FLIGHT reaches our readers, the machine will have been flown.
The Pobjoy "R" engine should give ample power for any conceivable manoeuvre, and as this engine has by now firmly established its reputation for reliability, the "Satyr" should suit the private owner who desires a machine which is easily capable of getting out of very small fields. As the wing loading is only about 7 lb./sq. ft., the rate of climb should be good, and the angle of climb such that obstacles can be surmounted with a very small horizontal run.
The main data of the ''Satyr'' are as follow: Length o.a., 18 ft. (5.5 m.); wing span (upper), 21 ft. (6.4 m.); wing chord (upper), 3 ft. 6 in. (1.067 m.); wing span (lower), 19 ft. (5.8 m.); wing chord (lower), 3 ft. (0.915 m.); wing area, 117 sq. ft. 10.86m2). The loaded weight is expected to be about 850 lb. (386 kg.). 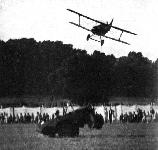 The Bombing of the Bucking Ford. The machine is a Miles "Satyr." 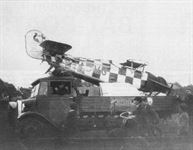 Mrs Victor Bruce’s Miles Satyr G-ABVG after an argument with some telephone wires during a landing in a small field near Stafford. Mrs Bruce cut things rather fine and the cradle of wires catapulted her and the Satyr into a heap 15ft below. Don Brown said that the incident occurred in September 1936.
<<   0/0   >>