WE are now able to give our readers further information of that interesting little single-seater aircraft built in the Transvaal, South Africa, the ДальшеMore>>> first photographs of which we published last week. This machine was built in order to test out, in powered flight, a few of the ideas which the designer gained as the result of gliding and soaring. The particular features referred to, include high-aspect ratio, flexible trailing edges, rotating wing-tip control and single-spar construction. It should be borne in mind that this aircraft had to function satisfactorily in a locality the altitude of which was 6,000 ft. above the sea level. This, the first machine, has admittedly been built somewhat heavier than is necessary, and it is estimated that at least 90 lb. could be saved upon subsequent models.
The wing section is one developed by the designer from a combination of the experience he has gained in sailplane construction and also from study of the flight of vultures. The trailing edge is flexible for 30 per cent, of the wing chord, along the complete span of the wing, including tips. The wing, as can be seen from the photographs, is of full cantilever construction, with a spar depth at the root of 10 1/2 in., tapering to 3/4 in. at the extreme tip. The rotating-tip control has been found peculiarly adaptable to the single-spar construction, owing to the elimination of torsional stresses, whatever may be the incidence of the tip in relation to the wing. The spar roots slide into a frame forming the main bulkhead of the fuselage where they butt, and are pulled together by nickel-chrome steel screwed couplings. The wing tip itself has a square-section boxed plywood spar, which slides over, and is bolted to, a duralumin tube of 17 gauge by 2 in. diameter, which, as can be seen in the drawing, is mounted on the main wing spar by one plain bearing and one tapered roller bearing.
The fuselage is of fairly normal wooden construction and is plywood covered. The tail surface controls are all internal and the tailplane is adjustable from the cockpit; the engine at present fitted, is an A.B.C. "Scorpion," which is bolted on to a steel plate supported by steel tubes extending from the main bulkhead of the fuselage. The chassis is of straightforward design, with bent axles pivoting on fittings at the base of the main fuselage bulkhead, while the shock-absorbing struts are of the steel-tube type containing a spiral steel spring. Goodyear 16-in. air wheels are fitted. The machine has now accomplished numerous cross-country and test flights, and has been found pleasant to fly in every way. The controls are very sensitive, and horizontal flight can be maintained at 37 m.p.h.

ON SAILPLANE PRINCIPLES: An interesting little single-seater which has been built in the Transvaal, S.A. With the A.B.C. "Scorpion" it cruises at 60 m.p.h. comfortably, and has a landing speed of about 30 m.p.h.

This three-quarter rear view of the "Altis" brings out the wisdom of the adage that "when an aircraft looks right, it generally is right." The tail units in particular appear very sensibly planned. 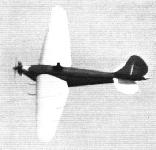 The "Altis" is shown in flight

The peculiarly "birdlike" form of the fuselage is brought out.

The method of obtaining the flexible trailing edge. The top and bottom rib caps are both free to slide.

The drawing shows the method of bracing the single wing spar. The tube at the end carries the rotating tip. 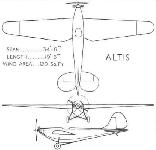