AN interesting visitor to the A.S.T. School at Hamble last week-end was Mr. Anthony Banhidy with his "Gerle 13" (Armstrong-Siddeley "Genet Major"). "Gerle" is the Hungarian for Turtle Dove, and the figure 13 stands ДальшеMore>>> for the thirteenth aeroplane which Mr. Banhidy has designed and had built at the Muegyetemi Sportrepulo Egyesulet or, to put it into English, the Sport Flying Club of the Budapest Technical University. Mr. Banhidy is engineer and designer in charge of the workshops of the Club. That he has great faith in his machine is shown by the number of long-distance flights which he has made.
His latest tour started with a non-stop flight from Debrecen, in Hungary, to Rapla, in Estonia. This distance of 1,380 km. (8S7 miles) was covered in 13 hr. through execrable weather. He encountered rain the whole way and a very fierce head-wind. As a matter of fact, the conditions were so bad that the Meteorological Office sent a message down to the aerodrome telling him not to go, but this arrived ten minutes after he had left. That day the Estonias lost a large number of machines which were "blown off the aerodrome."
He continued his tour with flights to Helsingfors, Stockholm, Copenhagen and then to Croydon. This latter, he says, compensated him for all his other vicissitudes. He made the trip of 1,080 km. (672 miles) in 6 hr. 45 min. with the help of such a tail wind as pilots only encounter once in a lifetime. By the time this appears in print he will, if all goes well, have returned to Budapest, non-stop from Croydon.
His machine is a normal biplane with N interplane bracing struts. The fuselage is of welded steel tube construction with wire bracing for the rear half, and the wings have normal spruce and plywood box spars and plywood ribs. The leading edge is also plywood covered. The tail units are of welded-steel tube and fabric covered. Everything is quite straightforward except that at the present time the front seat has a large fuel tank in it, giving the machine a range of 15 hr. The wing section is Gottingen 412, with a 20-deg. stagger and 2-deg. dihedral. The normal tankage is 3 1/2 hr. The undercarriage is of the semi-divided type, with rubber-in-tension shock-absorbing legs. The weight empty is 460 kg. (1,012 lb.) and fully loaded 920 kg. (2,023 lb.). The top speed is 185 km.p.h. (115 m.p.h.) and the landing speed 60 km.p.h. (37 m.p.h.). The climb as a single-seater is 1,000 m. (3,280 ft.) in 3 min. A previous reference to this machine appeared in FLIGHT for June 8 last.

A HUNGARIAN PRODUCTION: Mr. Anthony Banhidy and the "Gerle 13" biplane he has designed. 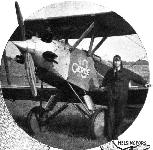 1025 MILES NON-STOP: It was made on a 100 h.p. Siddeley Genet Major engined Gerle 13 designed and built at Budapest under the supervision of its pilot Mr. Antony Banhidy.