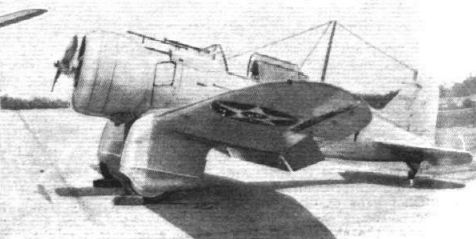 LATELY the Northrop Corporation, controlled by the Douglas Aircraft Co., which is, in turn, a subsidiary of Northwest Aviation, has turned its hand to the manufacture of military aeroplanes. An "attack'' Version of its Gamma ДальшеMore>>> monoplane has been adopted by the U.S. Army Air Corps (the Northrop bomber purchased by the Air Ministry is basically similar) and it has a number of experimental Army and Navy types on test. Outstanding among these is the Navy fighter known as the XFT-1.
The XFT-1 is a monoplane (unusual for a Fleet machine) of all metal construction. Over a fuselage framework of pressed duralumin formers stringers of H section have been riveted.
A fourteen-cylinder two-row Wright Whirlwind of approximately 700 h.p. is bolted on a mounting of steel tubes. It is provided with a full N.A.C.A. cowling constructed in three major sections.
Of typical Northrop construction, the wing is in three sections. The spars and ribs are of duralumin and are interlaced to take unusually great stresses caused by sudden pull-outs from steep dives. The two portions of the fixed "trousered" undercarriage are attached to the centre section of the wing; one oleo strut is provided for each unit. To the rear portion of the centre section is attached a flap which, it is said, functions automatically when the stalling 'point is reached. Frise ailerons controlled by push-pull rods are fitted and from their inner ends to the centre section there are two additional flaps.
A short span (29ft. 8in.) is a notable feature of the machine. The length is 19ft. 11in. and the height 9ft. 9in. It is said that at 75 per cent, full power the XFT-1 cruises at 245m.p.h., the full throttle speed being 272 m.p.h.