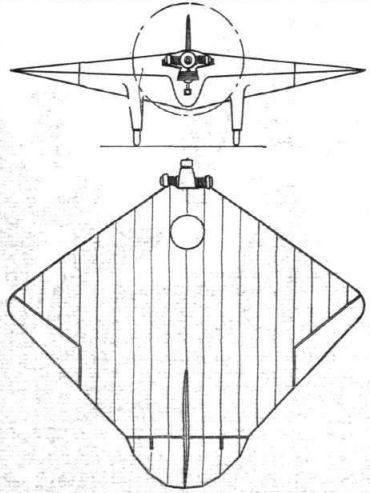 AFTER many years of worship of the aspect ratio goddess, there is a noticeable tendency in several countries to depart from this ideal ДальшеMore>>> and go almost to the other extreme of using a wing which is flying "end on," or, more correctly, "corner on." Two excellent examples have just appeared, one in America and the other in Italy.
<...>

As far as is known, the other "flatfish" has not yet been built full size, but five different scale models have been tested in the wind tunnels at Rome and Turin. The wind tunnel tests are stated to have given very good results, the drag of the models being low, and the lift maintained up to angles of incidence of about 30 deg. Stability both fore and aft and lateral is reported to have been good, as was also the controllability.
The designer of this Italian rhomboidal aeroplane, Piana Canova, has now designed a full-size machine for which the following data have been calculated :-
Wing span, 16 ft. 5 in.; length overall, 16 ft. 5 in.; wing area, 141 sq. ft.; tare weight, 352 lb.; disposable load, 308 lb.; loaded weight, 660 lb.; maximum speed, 105-110 m.p.h.; cruising speed, 93 m.p.h.; landing speed, 40 m.p.h.; range, about 650 miles.
The engine which it is proposed to fit is the American Aeronca air-cooled flat-twin of 35-40 h.p.