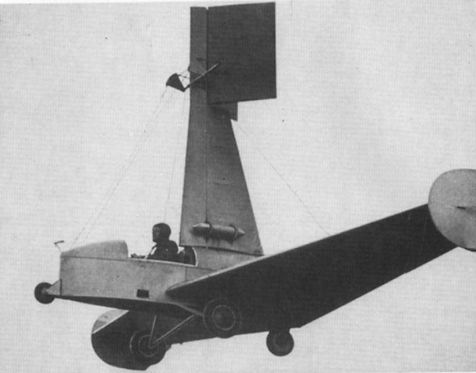 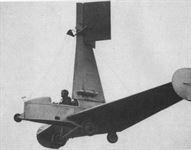 TAILS UP! Successful performance has now been achieved at Toussus le Noble, France, with this startling aircraft, which was illustrated in Flight a year ago. It is the brain-child of M. Charles de Rouge.
Charles de Rouge flying his Elytroplan at Toussus-le-Noble in 1936. It was reported to have helicopter-like qualities but all we know about this weird­ looking device apart from that is that it was powered by a 30 h.p. Mengin engine. Any further information will be gratefully received.

TAILS UP! This weird machine, built in France by the Vicomte Charles de Rouge, is claimed to have helicopter-like qualities. The tail surfaces appear to be hinged and to give longitudinal control.
<<   0/0   >>