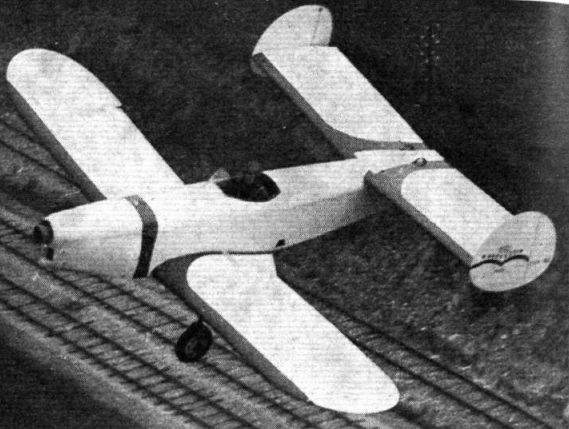 EVEN in the early days of flying the tandem arrangement of aerofoils was thoroughly tested by the late M. Gustave Eiffel ДальшеMore>>> in his wind tunnels. Relatively poor efficiency seemed to accompany any possible arrangement of the wings, and for many years no practical development of full-scale aeroplanes with tandem wings took place.
Then came the glider competition at Itford Hill and Firle Beacon, near Lewes, in Sussex, at which the greatest duration was established by M. Maneyrol, a French pilot, on a French Peyret tandem glider in which both wings were provided with ailerons so interconnected that they could be used both as elevators and as ailerons. The British gliders taking part in the meeting suffered from inadequate control, whereas the Peyret had ample control, and thus enabled Maneyrol to manoeuvre so as to remain in the up-currents from Firle Beacon for 3 hours 21 minutes 7 seconds.
M. Louis Peyret, encouraged by his success, struggled along in an endeavour to develop the tandem aeroplane, but without much success, mainly through lack of capital. Now another French constructor has taken up the development of the tandem machine, but has approached the subject in a somewhat different way. The Mauboussin "Hemiptere" is, presumably, so-called because of its resemblance to the hemiptera family of insects, which have four wings, one pair of which is partly coriacious, or leathery and tough, and partly membranous.
M. Mauboussin, as already mentioned, has approached the problems of the tandem aeroplane from a different angle. Arguing that if one has a tandem arrangement of the wings, and the e.g. is properly located, the front wing will stall first, putting the machine into a dive before it can go into a spin. If, therefore, the ailerons are transferred from the front to the rear wing, one should have adequate lateral control on the unstalled wing; and even if the front wing should have a slight tendency to spin it will be prevented by the unstalled and fully controlled rear wing from dragging the machine as a whole into a spin.
The fundamental design of the Mauboussin "Hemiptere" (writes R. C. Wood, our Paris correspondent) involves front and rear wings of different aerofoil sections, and arranged with the rear wing mounted on top of the fuselage, while the front wing is attached to the bottom of the fuselage. There is a decalage of three degrees, as the front wing is at an angle of 3 degrees when the rear wing is at o deg. incidence. In other words, the arrangement is that of a heavy negative stagger, the distance between the front and rear wing being equal to the chord of the front wing, and the gap one half of the front wing chord, as shown in the first diagram.
Approximately, the area of the rear wing is 60 per cent, of the front wing area, and some of the loss of efficiency introduced by the tandem arrangement has been recovered by M. Mauboussin by placing the fins and rudders at the ends of the rear wing, an arrangement which reduces "end losses," and which has recently been used with success in French and British bombers.
From the curves in Fig. 1 it will be seen that the minimum drag coefficient of the rear wing is lower than the minimum drag coefficient of the wing when tested by itself. These results, by the way, were obtained on a model of aspect ratio 6.7. At large angles of incidence, on the other hand, the drag coefficient of the rear wing is higher than on the wing by itself; this helps to steepen the glide.
Although the maximum lift coefficient of the rear wing is lower than that of the wing by itself, it occurs at a greater angle of incidence, and so makes for safety by ensuring that the front wing shall stall well before the rear wing.
When the Hemiptere tandem wing arrangement is compared with an orthodox monoplane it is found (see Fig. 2) that , although there is a slight loss in maximum lift coefficient, which may be expected to increase the landing speed somewhat, the drag coefficient of the tandem combination is slightly smaller over a wide range of incidences.
Ailerons are fitted on the rear wing only, while the front wing is provided with trailing edge flaps for increasing the lift. These flaps work in conjunction with the rear wing flaps to give an elevator effect.
The twin rudders can be used together for directional control in the ordinary way, but can also be pulled outwards together to form air brakes.
Any engine of approximately 40 b.h.p. can be used in the Hemiptere. That shown in the photograph is a Train engine. With this engine the machine has a maximum speed of about too m.p.h. The tare weight is 230 kg. (507 lb.), and the loaded weight 350 kg. (770 lb.). This figure includes enough petrol load to give a cruising range of 540 km. (335 miles) at a cruising speed of 84 m.p.h. The machine is, of course, a single-seater. 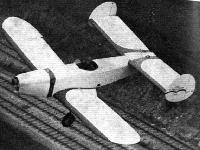 The Mauboussin "Hemiptere" in flight.