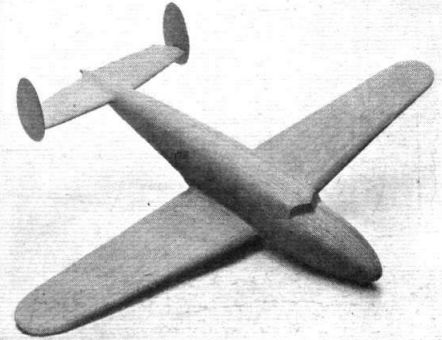 SWAN and CYGNET
Advance Details of the C. W. Swan Light Transport and the Production-type Cygnet

UNDER the courageous guidance of Messrs. C. R. Chronander and J. I. Waddington, C.W. Aircraft are well into a batch of Cygnet all-metal ДальшеMore>>> cabin two-seaters and are preparing detail drawings for a high-speed six-eight-passenger transport of the most modern conception. The elaborate mock-up of the transport which has been built foreshadows a low-wing cantilever monoplane of classically beautiful lines and, considering the high performance promised, a surprisingly commodious interior. A number of operators have already been down to Slough to assess the value of the Swan, as the projected type is known, for charter and feeder-line work over distances up to 700 miles. Captain Olley expressed his eagerness to give the prototype a "service trial."
The Swan design which is to be realised should not be confused with a projected machine first illustrated in Flight of December 10 last year. This was a smaller model with two Villiers-Hay Maya engines, whereas the current design is being stressed for units of as much as 450 h.p. each. The early design also embodied the “tadpole” fuselage of the type which has given such encouraging results on the Cygnet, but this layout was found impracticable where a large cabin, extending some distance aft of the trailing edge of the wing, was called for. Accordingly the new Swan has a more-or-less conventional fuselage of extraordinarily pleasing shape. Mr. R. S. Dickson, whose ability is reflected in a marked degree in the performance of the Spitfire, has a pronounced aversion to straight lines, and consequently, as will be gathered from the G.A. drawings, the Swan's fuselage is a joy to behold.
Quite apart from its obvious advantages as a purely commercial proposition, the Swan could easily be produced as a luxurious private-owner or business executive type or as an advanced twin-engined trainer, reproducing the characteristics of large bombers and trunk-line transports, for coastal reconnaissance, ambulance work or aerial survey.
The least expensive "case" for the Swan calls for Gipsy Six Series I engines with fixed-pitch airscrews and non-retractable undercarriage. Series II "Sixes" and variable-pitch airscrews, in conjunction with a retractable undercarriage, confer a very marked increase in performance, but the practical ultimate in speed is obtained with a pair of 450 h.p. Pratt and Whitney Wasp Junior or Wright Whirlwinds of similar output. Other power plants which suggest themselves are D.H. Gipsy Twelves, Walter Sagittas or Fairchild Eangers (all inverted vees), Bristol Aquilas {temporarily out of production owing to the exigencies of expansion), Napier Rapiers or the economical American Jacobs.
The main structure of the Swan is of the stressed-skin light alloy variety, the heavily loaded portions being of high-tensile steel. Particular care has been taken to guard against corrosion, the greater part of the skin being of Alclad which requires neither protective covering nor routine inspection.

While the fuselage construction is fairly orthodox, with hoops and stringers, the wing construction is distinctly unconventional, the spar booms being of Reynolds tubing. At the root end the booms are five tubes thick but there is a progressive thinning out toward the tip where there is just a single 2in. tube. The employment of tubing makes not only for simplicity but for great economy.
The pilots' cockpit of the Swan has a windscreen of fairly conventional design, a suggested moulded version, which goes much further toward preserving the fine fuselage fines, having been temporarily shelved because most air line pilots seem to have very fixed and conservative ideas about screen design. The cockpit has side-by-side seating with dual Stinson-type wheel controls protruding through the dashboard with all their attendant works out of sight behind. The essential control levers are arranged on a bank or box on the centre line with the compass mounted on top, where, it is to be hoped, it will be quite happy amid so much metal. A careful choice of material for the control bank is indicated here. The elevator and rudder tab lever are on either side of the bank, together with the flap and undercarriage controls. Throttle, mixture and airscrew controls are mounted in gates on the front of the bank.
Mr. Chronander is especially interested in the patent flap which will be incorporated. This will have a rearward and downward motion and will benefit take-off and landing.
Radio is arranged under the dash, the transmitter being in front of the second pilot and the receiver in front of the captain. Generator and master controls are between the seats.
Luggage is evenly distributed between two compartments, one in the long tapering nose and the second behind the lavatory aft of the cabin.
The empennage of the Swan follows the latest twin-fin-and-rudder practice and the tailplane is of strikingly broad span. Another prominent characteristic of the machine is the pronounced dihedral on the main planes.
<...> 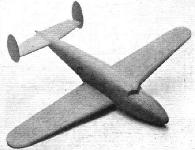 The wind-tunnel model of the Swan less nacelles. Note the extraordinarily neat tail

Mr. R. S. Dickson, C.W.'s chief draughtsman on the Swan, surveys the mock-up of his very efficient-looking design. The nacelles, it will be noticed, are for Gipsy Sixes, although the prototype may have Wasp Juniors. 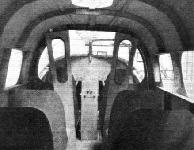 The drawing shows that commodious baggage compartments and, considering the performance, a roomy cabin, characterise the machine

The C.W. Swan (Choice of in-line or radial engines)