WHAT America might call an "all-time high" in mammoth seaplane design must surely be reached by the lay­out of the Seversky Super-Clipper, ДальшеMore>>> intended to fulfill a Pan-American specification for trans-oceanic aircraft. In spite of its positively Wellsian conception, the design seems to have progressed a considerable distance beyond the "figment of an inventor’s imagination" stage.
The Super-Clipper is to carry a pay-load of 43.000lb. (19 1/4 tons) and to have a range of over 5.000 miles at a minimum cruising speed of 250 m.p.h., the top speed being over 300 m.p.h. No gross weight is quoted. It is to accommodate 120 passengers, "with all the comforts of a luxury ocean liner," and will be handled by a crew of sixteen. The luxuries, it appears, will include staterooms, each with its own toilet facilities; a dining saloon to seat 50; an observation deck; and a cocktail lounge. The entire interior will be "supercharged" so that an operational height of 20,000ft. may be maintained without discomfort.
As may be deduced from the illustration of a model, the 250ft.-span wing houses much of the passenger accommodation, the remainder being in the central nacelle and the twin fuselages or tail booms. The under portion of each fuselage, for about two-thirds of its length, consists of a large retractable float. The floats will be extended by hydraulic ram and piston mechanism, which will also act as a shock-absorber when land­ing or riding a rough sea. The wide track will ensure lateral stability.
Eight 2,000 h.p. (2,300 for take-off) liquid-cooled engines are specified, giving a total of 16,000 h.p.. with 18.400 for take-off. The two nose units and the central one aft will each consist of two engines driving one airscrew, while the outboard ones will be single engines. The nacelles will, like the rest of the interior, be supercharged, and mechanics will have access to the engines in flight.
Shot-welded stainless-steel construction will be used through­out. The fuel tanks will hold 17,000 gallons.
Finally, there is the solemn thought that the Seversky can be "adapted as a super-dreadnought of the air," when it will be able to carry ten 2,000lb. bombs 12,000 miles at a speed of 300 m.p.h. Phew!

The Seversky Super-Clipper with floats retracted - a model. 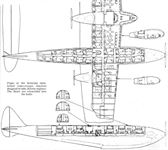 Plans of the Seversky twin-hulled trans-oceanic machine designed to take Allison engines. The floats are retractable into the hulls.
<<   0/0   >>