Aircraft T10S-3 (P-42) was stripped of most of its equipment and paint to reduce weight for its record-breaking flights.

The R-27R semi-active radar-guided long-range air-to-air missile is one type of a family developed especially for the Su-27 and MiG-29 fighters. 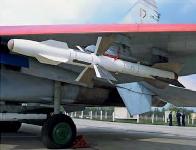 The R-27T differs from the R-27R with the passive infrared Geophisica 36T seeker in that it has no mid-course path correction and tracks only after the target is locked on by the seeker.

30mm rounds being loaded in to the Su-27’s Gryazev-Shipunov GSh-301 cannon fitted in the starboard leading-edge root extension.

Lyulka-Saturn’s AL-31F turbofan engine is the powerplant of all Su-27 and Su-30 versions.

Aircraft T10-20R was prepared for a range of record flights with fuel tanks fitted in the nose and tail beam, and ogive ends attached to the wings. The record-breaking flights were eventually abandoned. 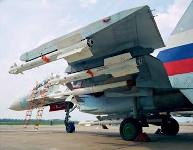 Short-range R-73s and long-range R-27s on a Su-27 at the Lipetsk evaluation centre. 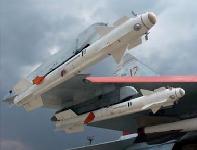 Thanks to a combination of gas and aerodynamic controls, the R-73 is one of the world’s best short-range air-to-air missiles. The laser fuse of the R-73L is recognisable by rectangular windows positioned aft of the front fins.

A Su-27 with its airbrake deployed atop the fuselage.

On February 7, 1987, a pair of Su-27s were encountered by a Western aircraft, two Royal Norwegian Air Force F-16s over the Barents Sea, for the first time. On September 13, 1987, a mid-air collision occurred between a Soviet Air Force Su-27 and a Royal Norwegian Air Force P-3 Orion patrol aircraft. The P-3 was intercepted at 10.39hrs by the Su-27, flown by Vasily Tsimbal assigned to the 941st IAP, over international waters, 90km (48nm) from the coast of the USSR during a patrol in an area where Soviet warships were on exercise. To block out the Orion’s reconnaissance equipment the Soviet Su-27 flew beneath its belly. The propeller of the Orion’s outer starboard engine hit the Su-27’s fin. Fortunately, both aircraft returned to their bases.

Central to the Su-27's cockpit is the ILS-31 head-up display; on the right is the IPV tactical situation display, with the navigation device required for international flights above.

Su-30 502 is a Sukhoi test aircraft based at Komsomolsk used for the development of versions of the Su-30MK.

Once all contracts are fulfilled, Russia will have ten Su-30SM squadrons making it the most numerous fighter in the Russian Air Force fleet.

Since September 2015, four Su-30SM fighters are deployed to Syria to provide air cover to the Russian Air Group.

As of January 2017, the Indian Air Force had received 233 Su-30MKI fighters, including 50 delivered in flyaway condition from Irkutsk in Russia.

Su-30MK2V 1168 of the Aviacion Militar Bolivariana.

An Irbis radar during tests on a Su-30.

One of 18 Su-30MKMs delivered to Malaysia in 2007-2009 feature French and Russian-made systems instead of Israeli ones as used in Indian Su-30MKIs.

The Su-30MKI and its derivatives, like this Su-30MKM, are the most successful Russian fighter types of the post-Soviet period. By February 2017, Irkut had delivered 390 aircraft from an order book for 475.

The front cockpit of a Su-30MKK with two 150 x 200mm (6x8 inch) MFI-10-5 multifunction displays, an ILS-31 head-up display and a set of conventional standby instruments.

A rare weapon configuration under the folded wing of a Su-33 comprising two S-250FM unguided rockets on a twin pylon and an R-73 air-to-air missile and Sorbtsiya electronic counter­measures pod above.

Su-33s on the flight deck of the carrier Admiral Kuznetsov.

The UPAZ-1K refuelling pod fitted under a Su-33 enables fuel transfer to another aircraft at a rate of 2,300 litres per minute.

The UPAZ-1K refuelling pod features three coloured lights for signalling to the pilot of the receiver aircraft.

Su-35C 02 Red, one of the first batch of 12 delivered to the Russian Air Force in February 2014 and now operational at Dzyomgi Air Base.

The most modern member of the Flanker family is the Su-35S, intended as a low-cost complementary fighter to the T-50 PAK FA, along with its Su-30SM and Su-30M2 fleets.

The first Su-35 prototype, side number 901, was used for initial testing and lacks a fire-control system.

The first Su-35S for the Russian Air Force during tests with Kh-31 air-to-surface and R-73 air-to-air missiles. Note the freefall bombs loaded on pylons between the engines.

The upper forward fuselage of the Su-35 houses sensors for the OLS-35 IRST (left); the SOER missile approach warning system (middle); and the air refuelling probe (right), all mounted forward of the cockpit canopy.

Commando Helicopter Force Merlin HC3s will all be upgraded to HC4 standard under the Merlin Life Sustainment Programme, the first of which is expected to be delivered by the end of 2017.

Both of HMS Endurance’s Lynx HAS2ICE helicopters over Mare Harbour in the Falkland Islands during February 2007.

Lynx HAS2ICE XZ241/EE435 of 212 Flight assigned to HMS Endurance (A171) parked on the beach at Possession Bay in South Georgia.

This year is expected to see the maiden flight of a Y-20 fitted with the WS-20 engine, pictured on the inner port pylon on this Il-76LL testbed. 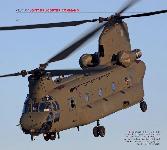 The Chinook is the now the only heavy-lift helicopter in service with the Royal Air Force. All 14 of the new HC6 variant, seen here, have been delivered to RAF Odiham whilst the legacy fleet has also been upgraded.

Dust landing training represents a vital part of the environmental training undertaken by many types within JHC. Here an upgraded Chinook HC4 based at RAF Odiham, home to the UK Chinook force, departs one such area having completed its sortie.

Captured completing a confined area landing, the Puma HC2 reached a new milestone in early 2017 completing 15,000 flying hours. In that time the Puma force has continually supported Operation Toral in Afghanistan and numerous training exercises in the UK and around the world as well as holding national standby commitment.

A CV-22 Osprey approaches a drogue on the end of the hose extended from a MC-130H Combat Talon II during a training mission.

The only weapon currently employed by the CV-22 Osprey, an M2 0.5-inch machine gun mounted on the rear ramp.

The cockpit of the CV-22 Osprey is dominated by five colour multifunction displays.

Upgraded Belarussian Air Force Su-27UBM1 side number 63. This aircraft crashed during a demonstration at Radom Air Base, Poland, in August 2009.

A Royal Marine descends the rope suspended from a Lynx HMA8 during fast roping training on board HMS Dragon P35) in the Arabian Gulf.

HMS Daring's Lynx HMA8 operated by 200 Flight delivers aid to the village of Hagden on the Philippines island of Guintacan in the wake of Hurricane Haiyan in November 2013.

A Lynx HMA8 from RFA Fort Victoria on scene of a Royal Marine boarding operation on a dhow with Somali pirates on board.

Weapon loading drills on the flight deck of HMS Montrose (F236) during Operation Kipion in the Arabian Gulf.

Members of 815 NAS prepare to load a dummy Stingray torpedo to a Lynx HMA8 on board HMS Edinburgh (D97) in the Caribbean. The drill loading was undertaken as part of a routine flying exercise.

Return from deployment. The pilot of Lynx HMA8 ZF557/PD426, assigned to Flight 208, hovers the helicopter to a parking spot at Royal Naval Air Station Yeovilton on March 10, 2017, marking the end of the type's final deployment and 41 years of operational service.

HMS Dragon’s Lynx HMA8 fires a salvo of flares at sunset at the end of a day-into-night training sortie.

A Lynx HMA8 is moved into the hangar bay on board HMS Manchester (D95).

Sea boats and the ship flight’s Lynx from HMS Chatham (F87) in the Northern Arabian Gulf while assigned to Combined Task Force 158 tasked with protecting Iraqi oil terminals in 2008.

Captured departing a forward refuelling point on Salisbury Plain is an Apache AH1 with a 230-gallon extended refuelling tank attached. The MoD will replace its legacy fleet with 50 Apache AH-64ES from 2020.

A classic sunset scene as an Army Air Corps Apache AH1 based at Wattisham descends to refuel from a forward refuelling point during a mission rehearsal exercise. JHC’s aspiration is its fleet of 50 AH-64E Apaches will be operational before the AH1 's scheduled 2025-2026 out of service date.

One of the first Y-20s delivered to the PLAAF. Reports suggest the four aircraft in service are the final prototype and three LRIP aircraft.

The first operational Y-20 unit is the 12th Regiment of the 4th Transport Division at Chengdu-Qionglai.

Two squadrons operate the U-28A, for utility and ISR missions.