The second prototype Atlas II, G-ABIV, photographed after it was fitted with a new fin and rudder in an attempt to improve spin recovery. Powered by a supercharged Panther IIIA engine, the Atlas made its first flight in May 1931.

The second prototype Atlas II was originally marked A-3. It received the marks G-ABIV in October 1931, after flight testing had been completed. It was kept by the parent company and used for Tiger engine development work.

Half a dozen Atlas Trainers under construction at Whitley Abbey. The Atlas remained in production until 1933. Of the 446 total built, 175 were Trainers. Entering RAF service in October 1927, with No 26 Squadron, the type was eventually supplanted by the Hawker Hart and Audax.

An Atlas AC of 208 Sqn on patrol in the Middle East. Based at Heliopolis, the squadron flew the Atlas from May 1930 until August 1935.

BRITISH AIRCRAFT TYPES WHICH ARE BEING FLOWN AT EL PALOMAR: 4, Armstrong-Whitworth "Atlas," with Armstrong-Siddeley "Jaguar" engine.
Fitted with a Mk I fuselage and Mk II wings, Atlas AC G-EBYF was used for Mk II development.

The same aircraft with Tiger engine and modified rear fuselage.

Atlas AC 409 of the Royal Canadian Air Force. This aircraft served with No 22 (AC) Sqn at Trenton, Ontario and later at Rockcliffe. Two batches of Atlases were exported to the RCAF: a batch of six was supplied by Armstrong Whitworth between 1927 and 1929, and a batch of former RAF aircraft was sent out in 1934.

The third Atlas Mk II, G-ABKE, was completed in September 1931 and was delivered to 4 Sqn at Farnborough for service evaluation. It later passed to 16 Sqn at RAF Old Sarum for night-flying trials.

Two views of the balanced gun turret fitted to Atlas II G-ABIV in 1934. 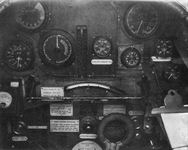 The cockpit of the Tiger-engined Atlas test machine, G-ABIV. Most of the labelling relates to the test engine.

The gunner’s cockpit in the Atlas I, with the pilot’s cockpit forward.

The Atlas II prototype G-EBYF photographed following its landing accident at El Palomar aerodrome, Argentina on March 23, 1931. The aircraft was shipped back to Whitley and repaired.