INTERCEPTING EXTRAORDINARY: Our Photographer has caught the Hawker "Fury" (Rolls-Royce "Kestrel" engine) high above the clouds as Mr. Bulman swung it up and out in an Immelman Turn after "attacking" a Hawker "Horseley" piloted by Mr. Sayer.
An unusual view of Hawker Fury I K1944, from the same initial batch. After service with 43 Sqn it became an instructional airframe in June 1936.

The Kestrel VIS engined Hawker High Speed Fury, with tapered lower wing and carefully-faired struts. The aircraft spent most of its life with Hawker, Rolls-Royce and the RAE and was used as a Kestrel and Goshawk engine testbed.

Fury II K7284 was attached to the Station Flight at RAF Northolt. Delivered towards the end of 1936, it was lost in a forced landing at Fulmer, Bucks in September 1939. 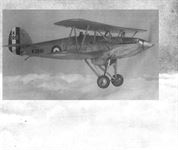 Hawker Fury I K1926 was the first production aircraft. After a period with the A&AEE and the RAE, it flew with 1 Sqn; it was finally grounded as instructional airframe 928M.

A fine photograph of Hawker Fury I K1926, the first production aircraft from an initial RAF batch of 21 aircraft delivered in April 1931.

KEITH WOODCOCKS painting depicts Fury I K2065, also in the colours of 1 Sqn.

The unmarked Hawker Hornet photographed at Brooklands in January 1929. It was the true Fury prototype and later took up the serial number J9682.