One of the B-24s that narrowly avoided the disaster at Iron Range in November 1942, serial 41-11904, Pride of the Yanks, of the 400th BS, is seen here over Ward’s Strip, Port Moresby, the following year, after being fitted with the nose-turret modification. The aircraft had managed to depart the airfield before the carnage began.

Big Emma and friends: B-24 41-23751, seen here at Ward’s Strip in June 1943, was the aircraft which precipitated the departure delays of the November 16 mission, and which lost its astrodome to Bombs to Nip On. On August 8, 1943, Big Emma encountered bad weather and crashed near Port Moresby, killing all aboard.

Liberator 41-23767, named Chosef, participated in the 90th BG’s first combat mission, a reconnaissance sortie over the eastern coast of New Guinea on November 11, 1942. It is seen here under camouflage netting with members of the 319th BS at Fenton, Northern Territory, in May 1943. 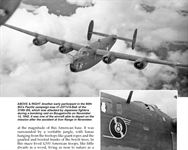 Another early participant in the 90th BG’s Pacific campaign was 41-23714 8-Ball of the 319th BS, which was attacked by Japanese fighters during a bombing raid on Bougainville on November 14, 1942. It was one of the aircraft able to depart on the mission after the accident at Iron Range in November.

Details of the nose art on four of the aircraft involved in the catastrophe; Pride of the Yanks (41-11904) and 41-23720 Tear-Ass (The Bull) both got away before 41-23942 Bombs to Nip On lost control. Hellzapoppin was named after the 1941 Ole Olsen and Chic Johnson movie, as its regular pilots were called Olsen and Johnson.

Liberator 41-23942, Bombs to Nip On, of the 400th BS, at Iron Range in early November 1942, probably after a mission, as the navigator/bombardier takes the Norden bombsight from the aircraft to be locked away after landing. Within days Bombs to Nip On was to be at the centre of a major tragedy.

The 90th BG moved from Key Field to Greenville, South Carolina, in June 1942, for training, before spending a few weeks at Willow Run, Michigan, where the unit’s B-24Ds are seen here on their arrival on August 4 the same year. The 90th took its Ds into combat in the Pacific the following month.

Originally destined to become a Liberator II for the RAF, AL626 is seen here at Iron Range in December 1942, after having been requisitioned by the USAAF as an LB-30 in the aftermath of Pearl Harbor. Note the proximity of the parking area to the packed-earth runway, leaving little room for error on take-off.

Live to fight another day; after 41-23765 was flown with its makeshift wooden nose to Brisbane for repair, it was decided to fit a Consolidated tail turret in its place, and it is seen here at Archerfield, near Brisbane, on March 3, 1943, with the new turret in place and bearing its new name, Connell’s Special, on the port fuselage. 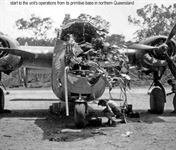 The nose of 400th BS B-24 serial 41-23831, one of the few in the 90th BG apparently not to sport a name, was amputated by squadron-mate Bombs to Nip On during the unit’s disastrous night take-off from Iron Range on November 16, 1942. The aircraft was due to be the eighth in sequence to depart the remote airstrip.

Crunch! The force with which Bombs to Nip On went careering through the flight line is evident from this photograph of 41-23765, another apparently nameless machine, the day after the incident. Second to be struck by the out-of-control Bombs to Nip On, ’765 lost its glazed nose and a sizeable portion of the port forward fuselage. 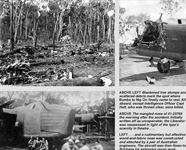 TOP LEFT Blackened tree stumps and scattered debris mark the spot where Bombs to Nip On finally came to rest. All aboard, except Intelligence Officer Capt Holt, who was thrown clear, were killed.
TOP RIGHT The mangled nose of 41-23765 the morning after the accident. Initially written off as unrepairable, the Liberator was reassessed in light of the type’s scarcity in theatre ...
BOTTOM LEFT ... and a rudimentary but effective wood-and-fabric nose was constructed and attached by a pair of Australian engineers. The aircraft was then flown to Brisbane for extensive repair work.

In contrast, sister aircraft 41-23831 was so badly damaged, with almost the entire forward fuselage sliced off, that it could only be scrapped for spares at Iron Range. Some small consolation was that the crew was not aboard at the time, owing to the confusion of the poorly planned take-off; but a soldier guarding it was killed.